Range troopers were a specialized variant of the Galactic Empire's stormtroopers. They were equipped with helmets similar in design to both the Imperial combat assault tank pilot's and Coastal defender stormtrooper's helmets, heavy armor with fur and a chestplate much like that of cold weather assault stormtroopers, and were armed with E-10R blaster rifles. They were also equipped with gription boots which allowed sure footing atop fast moving vehicles. The troopers were some of the toughest in the Imperial Military, and viewed other forces as "softer" amateurs.

Several range troopers were deployed to Vandor during the reign of the Empire and guarded a 20-T Railcrawler conveyex transport when Tobias Beckett's crew raided the transport for coaxium. 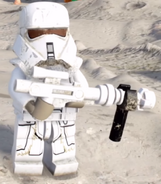