InGen Hunter is a Jurassic World Minifigure that appears in LEGO Jurassic World. He uses a rifle as his primary weapon. In the video game, his name is Bruce.

The InGen hunters were a team of animal wranglers who were hired by Peter Ludlow. Ludlow persuaded InGen's investors that a dinosaur theme park was still a profitable idea, and made plans to retrieve Isla Sorna's dinosaur inhabitants, relocating them to an arena in San Diego. The team was led by the skilled hunter, Roland Tembo, and mercenary Dieter Stark.

Bruce was presumably killed by the Velociraptors when the hunters entered the long grass in LEGO Jurassic World. 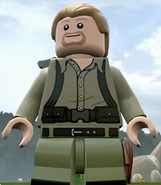 In LEGO Jurassic World
Add a photo to this gallery
Retrieved from "https://brickipedia.fandom.com/wiki/InGen_Hunter?oldid=1985987"
Community content is available under CC-BY-SA unless otherwise noted.