Indominus rex is a LEGO dinosaur, usually made of multiple parts like other dinosaurs. She is the main antagonist in the Jurassic World theme, which came out in 2015. The first version was white. There is also a new version of Indominus, a grey one, which came in July 2020.

The Indominus rex is a genetic hybrid dinosaur appearing in the film Jurassic World. She contains the base DNA of a T. rex, as well as DNA from other modern animals such as cuttlefish and tree frog, these modifications give it unique abilities such as the ability to camouflage itself. She also contains Velociraptor DNA, giving her increased intelligence and the ability to communicate with the Raptors in the movie. Perhaps the most terrifying aspect of her intelligence is her tendency to hunt not for survival, but for sheer pleasure, killing for sport, making her somewhat of a psychopath.

During the events of Jurassic World, she escaped and went on a rampage across the island, the ACU were unable to stop it, forcing Owen to use his Raptors to try and track it down and kill her. This ultimately failed when the Indominus rex manipulated the raptors to turn on the humans. Later, however, Owen managed to re-establish the bond with his raptors and made them turn on the Indominus rex. The Indominus rex killed the Raptors except for Blue who, with the help of Rexy the freed Tyrannosaurus, managed to push the Indominus rex to the moat where she was eaten by the Mosasaurus. 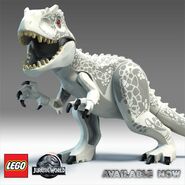 Français
Community content is available under CC-BY-SA unless otherwise noted.
... more about "Indominus rex"
RDF feed
ArticleRating
4 +
ShopDescription
A new hybrid dinosaur species created by t … A new hybrid dinosaur species created by the Jurassic World genetics team, Indominus rex is huge, ferocious, and filled with unknown potential. At 43 feet long and 18 feet tall, this one-of-a-kind beast is even larger than a T. rex. What destructive capabilities lurk beneath its pale, spiky hide? The world will soon find out when this powerful predator is unleashed!Attributes <br/>Height 56 <br/>Length 90 <br/>Weight 1050eight 56