Ingo the monkey is a member of the Time Cruisers, and is Dr. Cyber's pet. He is friends with Tim and Cranky.

In the Time Cruisers magazine comics, Ingo was originally introduced during the Western storyline of the original Timebusters run in Klick Magazine, meeting Tim Timebuster in the Wild West[7] and joining him on all subsequent adventures. In the 1997 World Club Magazine reboot, Ingo is introduced right away at the start of the comic, although he does not physically appear until the Fright Knights storyline begins. He does not speak intelligibly (with his French name, Kikol, being derived from his monkey chatter[7]), but his thoughts are illustrated by pictures in thought bubbles as he often imagines comparisons with the current situation. Throughout the comic series, Ingo displays a mischievous personality, with his playful pranks frequently causing trouble for Tim Timebuster, such as stealing Shogun Gi-Dan's blue sapphire,[8] pretending to be stuck on the Railway Express train tracks,[9] or opening a briefcase of money and letting the dollars fly out instead of handing it over to the police.[10] However, Ingo's antics have also helped Tim and gotten him out of trouble on multiple occasions, such as leading a shark to attack the Stingray Stormer,[11] jumping on the Robber King's helmet to blind him,[12] and juggling to distract an angry Rock Monster.[13] 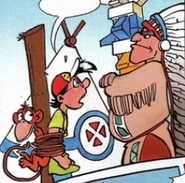 Ingo in the Time Cruisers comics


Always ready for monkey business in time travel +  and INGO