"Look at the hat on that guy!"
―Agent Trey Swift, referring to Invizable

Invizable has transparent clear head with gold sunglasses printed on it. He wears a Brick Yellow fedora. He has a Dark Red with torso printing depicting a suit with golf detailing. He has White hands and unprinted Dark Red arms. He wears Dark Red pants with no printing on them. He has a green shirt beneath his suit, printed on his torso, made of Lime Green $100 Bills, with a neck with golden details and a gold medallion with the image of a minifigure on it. His accessories include a grey ADU gun used previously in Alien Conquest, Galaxy Squad and several other themes.

Invizable was an extremely rich musician that got sucked by one of the AntiMatter's portals. which transformed him into an invisible man.

He was first seen in Ultra Agents: The Antimatter Missions, at Mission 4: The Trap is Sprung, where he jammed all the Ultra Agents' communications in order to free all the super villains. He was discovered by Agent Caila Phoenix while he was talking with Spyclops, right before he managed to free all the captured villains destroying their cells with portal bombs (Most likely created by AntiMatter). After all the villains escaped to the open sky, Infearno appeared at the scene, asking who was the one leading the way, immediately, Invizable appeared by saying I am.

Later, he helped to capture the citizens of Astor City along with the other super villains. He shot at Solomon Blaze in the sky, riding his scooter, however, after that he was shot down by the UltraCopter being ridden by Caila Phoenix.

He was later seen being held by Agent Jack Fury using his Ultra Armor, being captured with all of the other Super Villains.

Mr. Pale, or Paleman, was the Elemental Master of Light and another competitor in the Chen's Tournament of Elements.

His first appearance was at The Invitation, where Sensei Garmadon revealed that he was the Master of Light, right after that, he made himself completely invisible, as an example of his powers. Later in the episode, he was seen at the Chen's island with the rest of the competitors.

In Only One Can Remain, he was present at Chen's announcement of the Tournament of Elements. Later, when the competitors started to fight for the Jade Blades, he managed to steal one from Cole, however, he used white dust with him, revealing his location and managing to steal it back. Later, he managed to get another as he was seen with the rest of the competitors that had a Jade Blade in their hands.

"This is almost too easy! Like shooting agents in a barrel..."
―Invizable, after shooting down Solomon Blaze.
"Choose carefully. Only pick the good apples!"
―Invizable, while capturing the citizens of Astor City.
"Arrgh! My hat!"
―Invizable, after being shot down by Caila Phoenix.
"Do you mind if I join you?"
―Mr. Pale, asking to sit with the Ninjas. 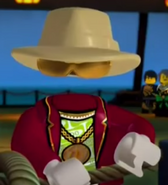 His appearance in Ninjago: Masters of Spinjitzu.

Invizable as a civilian before he turned into a villain.

… INVIZABLE</br></br>(former rock star)</br></br>Invizable is extremely rich and therefore people turn their heads when he walks down the street. Or they used to. But after the transformation everything has changed. Invizable has disappeared to the world! A fact that has made him bitter and bent on revenge. He is determined to spend his fortune on making people notice him again. After all, you can buy a lot of destruction for a billion dollars. lot of destruction for a billion dollars. +
Theme
Ultra Agents +
Title
Invizable +
Years
2015 +
Advertisement