Iron Fist is a Marvel Super Heroes minifigure introduced in 2012, which was exclusive to one set, 6873 Spider-Man's Doc Ock Ambush.

Iron Fist has unprinted green legs. He has a green torso with a horizontal yellow sash at its base and a black dragon printed on it, as well as green arms, and flesh coloured hands. His face is partially flesh, and that section is printed with a confident expression, but he wears a mask over his eyes, making the top of his head yellow. He has back printing showing the suit's cut on his back and the continuation of the yellow belt.

Daniel "Danny" Rand was the billionaire owner of his father's company, the Rand Corporation. He was born and raised in the mystical city K'un L'un. and beat the mystical dragon Shao-Lao, gaining the Iron Fist. He was given a year to give up his earthly possessions, say his goodbyes, and then become the king of K'un L'un.

Instead, he became a hero, the Iron Fist, and accepted to be trained with S.H.I.E.L.D. under Nick Fury with a team consisting of Nova, Power Man, White Tiger and was originally led by Deadpool, who later left S.H.I.E.L.D. and was replaced by Spider-Man. As a member of the team he fought villains, such as Doc Ock, Dr. Doom, Venom, the Lizard, Sandman, Electro,Kraven the Hunter, the Rhino, the Green Goblin, Carnage and Beetle. During Nightmare's spell, Danny revealed he felt didn't deserve the power given to him.

When Peter Parker was turned into Carnage by the Green Goblin, Danny took over the role of Spider-Man to avoid suspicion.

When Scorpion, who desperately wanted the throne of K'un L'un, attacked Iron Fist to stop him from from returning to the city, Danny was brought back to the city,as his year was up. Spider-Man followed him, as he refused to let this happen to his teammate, and Danny vouched for him. Danny had to compete with Scorpion in the Return of Shao Lao for the title of king. However, a poison Scorpion had infected Danny with earlier had blinded him, and Rand chose Spider-Man to represent him. Spider-Man managed to win the competition through his humility, but Scorpion tried to kill to Spider-Man. Iron Fist defeated Scorpion, while unlocking his second fist, and Scorpion was exiled. Impressed by his and Spider-Man's feats, the head monk gave Rand one more year.

He is portrayed as Luke Cage's best friend and often voices his opinions through on-the-spot proverbs befitting the given situation. Danny is a vegetarian, practices meditation and is well-versed in martial arts. Despite Danny's great wealth from his father's company, the Rand Corporation, he chose to live a simple life amongst his friends as part of his training. Having the majority of his training in K'un-L'un completed, Danny joined S.H.I.E.L.D to make better use of his skills and gain more worldly experience. In the episode "Return to the Spider-Verse Pt. 1", Iron Fist brings Spider-Man and Kid Arachnid to K'un-L'un where Nick Fury and Madame Web are currently hiding out so that they can send Spider-Man and Kid Arachnid to the different universes to piece together the Siege Perilous. The same episode showed a version of Iron Fist who is a vampire that is loyal to Lizard King. Using a combination of the Siege Perilous shard and a UV light, Spider-Man and Kid Arachnid were able to cure everyone of the vampire strain. In the episode "The Spider-Slayers Pt. 3", after Nova attacks Scarlet Spider because he learned that he was Dr. Octopus' spy for revealing Spider-Man's identity, to endanger S.H.I.E.L.D. Academy and Aunt May, he along with Power Man and Squirrel Girl attack the Spider-Slayers and when they stop they agree to watch him with Agent Venom for his bad actions that deserve to be locked up for life, before his energy was drained by Kaine. At the end of "Graduation Day Pts. 1 and 2", he, Power Man, White Tiger and Nova team with Spider-Man for the last time to find Dr. Octopus, protect Aunt May and, fight the Scorpion and Crossbones (who becomes the new Lizard) and defeat them. Then, at the graduation ceremony, he is trapped with the team in a contracting shield in the Triskelion and in the end is released by Spider-Man.

He appears as a member of Heroes for Hire alongside Power Man. 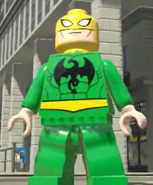