Iron Spider is a Marvel Super Heroes minifigure released in 2015 in the set 76037 Rhino and Sandman Super Villain Team-up.

The Iron Spider was a high-tech suit built by Tony Stark to be a new costume for Spider-Man, it was destroyed during the Civil War when Peter Parker defected to Captain America's side and was attacked.

During the Spider-Verse event we'd see an alternate reality Spider-Man who consistently used the armour.

Years later, a variant of the suit would be obtained by the super-criminal Aaron Davis, AKA The Prowler, uncle to Miles Morales from Earth-1610 AKA The Ultimate Universe. Davis would rename himself Iron Spider and be a villainous iteration of the figure who'd join the Sinister Six.

The Iron Spider armor was built by Tony Stark for Spider-Man to use as his own personal battle armor. Peter would however give it up. Afterwards, it is used by Amadeus Cho. 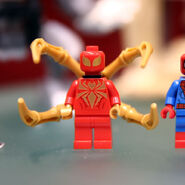 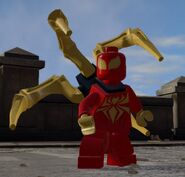