John Jonah Jameson is a minifigure from the Spider-Man theme released in 2004. He was redesigned in 2013 for the Marvel subtheme of Super Heroes.

He has the flat top hairpiece in black and face printed with black wrinkles and grey eyebrows and moustache. He has a black torso, white arms, and flesh hands. The torso is printed with a black vest, a white undershirt, and a loose tie with flesh showing. He has black unprinted legs.

This variant represents his appearance in the Spider-Man trilogy.

In 2013, he was redesigned for the Super Heroes theme to resemble his appearance in Ultimate Spider-Man. He now has Part 64798 in dark stone grey. His face is the German Mechanic's with cheekbones and a second angry face. He has a sand blue torso, arms, hips and legs, and flesh hands. His torso is printed with a sand blue suit, white shirt, a red tie, and a brown belt with a silver buckle. There is back printing depicting the back of the suit, similar to Lex Luthor's, but the sides of the suit are removed.

Jameson was the head of Daily Bugle Communications and used large screens all over New York to spread news and the message that Spider-Man and all other masked vigilantes are a menace. Despite his hatred of masked heroes, he was shown to praise the black suited Spider-Man (Harry Osborn as a controlled Venom) and Flash Thompson as a fake Spider-Man (he was in the real Spidey suit and manipulated by Peter) and happy when Spider-Man and his team (Iron Fist, Nova, White Tiger, and Power Man) were forced to clean up after a battle as part of the clean up crew Damage Control. He even went as far as to try to expose Beetle, which caused Beetle to try and kill Jameson, leading to Spider-Man and his team having to protect him. After the team succeeded, it was revealed that Jameson is not in his office at the DBC building, but at another location reporting from a monitor.

In LEGO Marvel Super Heroes, J. Jonah Jameson was seen in his office when Captain America and Mister Fantastic's fight with Doctor Octopus goes through the Daily Bugle.

In the first Bonus Mission, J. Jonah Jameson is seen when Agent Coulson oversees Doctor Octopus' community service of rebuilding the parts of the Daily Bugle that got trashed during his fight with Captain America and Mister Fantastic.

CGI of the Super Heroes version 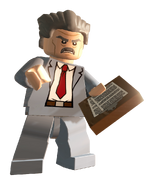