Jake Raines is a minifigure in the Pharaoh's Quest theme, introduced in 2011.

Jake Raines in a fictional newspaper of August 28 1924

Jake Raines inside the Pyramid.

Jake inside a car.

Jake Raines in a brown jacket. 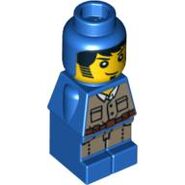 Jake Raines as a Microfigure


30091 Car +
ArticleRating
4 +
Image
Pha009.jpg +
InfoboxTemplate
Minifigure +
ShopDescription
Famous ace pilot and adventure hero Jake R … Famous ace pilot and adventure hero Jake Raines has made headlines all over the world for his daring exploits, which have ranged from looking for lost civilizations at the North Pole to searching out legendary treasures in the Amazon jungle. If something has wings, he can fly it…and if something threatens his mission or his friends, he’s ready to fight it with both fists flying! His hot-headed enthusiasm for leaping into danger sometimes lands him in trouble, but thanks to his courage and skills, things usually work out all right in the end. Jake has never believed much in ancient prophecies, curses or walking mummies…but all of that is about to change!ummies…but all of that is about to change! +
Theme
Pharaoh's Quest +
Title
Jake Raines +
Variations
Tan Jacket with ammo belt
Pilot Jacket
Microfigure +
Years
2011 +
Advertisement