Jane Foster, along with her colleague Erik Selvig and intern Darcy Lewis, were studying Norse mythology when a mysterious thunderstorm rampaged near their lab. When it ended, they accidentally rode over a man (who was actually Thor who was sent to Earth by Odin) who survived and was taken in. When S.H.I.E.L.D. found Mjolnir, they came and took all of Jane's technology. When Thor regained his ability to wield Mjolnir, he revealed his true identity to Jane and told S.H.I.E.L.D. to give back everything they took from her, an offer that was accepted. On the battle on the Bifrost, Loki, knowing that Thor had fallen in love with Jane, said that if the Bifrost was destroyed, Thor would never see Jane again. Later, Heimdall said that Jane was waiting for Thor's return.

Two years later, Jane was in London where she, Darcy and her intern found some kids who showed them some strange events happening: a cement mixer was floating in mid-air and when things were thrown down a certain staircase, they disappeared. Many of the stuff returned at the top of the staircase, but some didn't come back. Jane went to investigate these oddities and accidentally unearthed the Aether (pronounced ee-ther) a relic of the Dark Elves that infested her body. Thor arrived and took Jane to Asgard, where she found out about the Aether. She was later taken to the Dark world where Malekith the Accursed stripped the Aether from her body. She later found where the stuff from earlier disappeared to and found a portal to Earth. On their return to Earth, they learned of Malekith's plan: to use the Aether to plunge the universe into Darkness. Jane built machines that controlled the portals to send the Dark Elves back where they came from. After the battle, Jane had to wait for Thor's return again.

She is set to return in Thor's next cinematic adventure, during which she will become a version of Thor herself.

In the comics canon, Jane was a long-time love interest of Thor, though her life with him took a tragic turn when she was diagnosed with cancer. After an encounter with The Watcher left Thor unworthy of his sacred hammer, Mjolnir, Jane temporarily became its wielder, taking on the mantle of Thor for a time. Unfortunately, every time she would transform, the affects of her chemotherapy were undone, rapidly progressing her cancer. After fighting to save the Norse gods from a deadly foe, she finally succumbed to her illness. However, she was later revived in Asgard, becoming a Valkyrie. 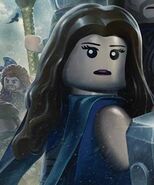