Jar Jar Binks is a Star Wars Episode I: The Phantom Menace minifigure released in 1999.

Jar Jar's most recent variant has dark grey unprinted legs, and a printed tan torso. The torso is printed with a tan vest, and a grey shirt. Attached to the torso, he has unprinted nougat arms and hands. Jar Jar has a specially-moulded tan head, with a long jaw and mouth, and yellow eyes on stocks protruding from its top. He has very large ears, which go all the way down the back of his torso. This obscures all of the back of his torso except for a small portion at the bottom of back, where a grey sash is visible. His ears are printed with flecks of dark orange.

The original version of Jar Jar was fairly similar to the current version, but with altered printing and coloration. His legs are gray, and his torso featured a slightly different printing with nothing on the back. His arms were unprinted tan, as was his head.

In LEGO Star Wars: The Video Game, Jar Jar's appearance is based upon the likeness of his first minifigure. He has the ability to perform a melee attack and can super jump, allowing him to reach locations in levels that characters with a standard double-jump cannot reach. The same Jar Jar is present in LEGO Star Wars II: The Original Trilogy when save data is present from the original LEGO Star Wars game and "Use Old Save" is purchased, and also in LEGO Star Wars: The Complete Saga. In these games, Jar Jar has the same abilities as before, but can also build objects. In LEGO Star Wars III: The Clone Wars, Jar Jar has the same legs and torso as Nahdar Vebb, except with tan coloured hands. He retains the same abilities as in the previous games, except he can now attack in the form of punches. In portable versions, "Jar Jar (Bombad)" is also a playable character.

Though originally banished from Otoh Gunga by Boss Nass, Jar Jar was later assigned general of the Gungan Grand Army during the Battle of the Grassy Plains. This happened because he helped to bring the Gungans and the Human population of Naboo together. Being clumsy, he had made his way on board a starship with Qui-Gon Jinn, Obi-Wan Kenobi, Queen Amidala, and others. After escaping the Trade Federation blockade, and landing on Tatooine, he was present during the Podrace in which Anakin Skywalker won himself, and those on-board the ship, a passage to Coruscant.

Jar Jar, on behalf of Padmé, proposed giving Chancellor Palpatine powers for the creation of a Clone army. This led to the beginning of the Clone Wars. During the wars, he acted as a Jedi to try to reclaim Padmé on Rodia. He was also caught in a virus bomb laboratory with Ahsoka Tano, Captain Rex, and Padmé. He was later made representative of Naboo, and was the first Gungan to represent his people. Jar Jar has a big family of Gungan relatives.

Comparison of Original to New Jar Jar Binks (Back)

The back of the 2011 redesigned Jar Jar 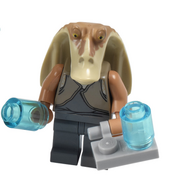 Jar Jar with a Booma Canister

Jar Jar with a snake and a scorpion 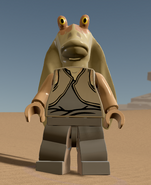 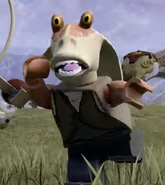