A Jawa is a minifigure from the Star Wars theme, first released in 2005 and redesigned in 2014.

The Jawa is reddish-brown and wears a short cape and hood. The Jawa is shorter than other minifigures because of its legs, which are smaller than the normal minifigure legs. They are also immobile; a hinge could not be added to them without increasing the size.

The torso of the Jawa is reddish-brown and has printing of a wrinkled robe and two straps running across the torso in an X pattern. One strap holds four pockets and one holds a single pocket.

The Jawa's head is all black, except for two bright yellow dots for eyes.

The Jawa was a playable character in all of the Star Wars video games released. It had the ability to jump, and could crawl through chutes and spaces that other larger characters could not. It was also armed with an ion blaster, which temporarily shut down any droids that were hit by the blast. When enough studs had been collected, a "Super Zapper" could be purchased. The Super Zapper was more powerful than the standard ion blaster and had the ability to destroy droids.

Jawas were scavengers native to Tatooine. They scoured the deserts of the planet for anything of value, mainly droids, and stored it in their Sandcrawlers. When they had collected enough items, they stopped near settlements and moisture farms and set up their captured droids and foraged equipment outside for selling. They were known for swindling money out of the customer by frequently selling faulty or outdated equipment. They were descended from the Kumungha, an advanced technological race, which had evolved into two different species: the Jawas and the Tusken Raiders. The Jawas had a tentative peaceful relationship with Tusken Raiders, though they preferred to stay away from them. They were also afraid of Krayt Dragons and sandstorms. Some traveled offworld, far from Tatooine. These Jawas, unlike their Tatooine counterparts, had red eyes and dressed in dark gray robes.

After recently crashing on Tatooine, the droids R2-D2 and C-3PO were observed by the Jawas. The latter ambushed and electrocuted the duo, temporarily shutting down their systems, and loaded them onto their sandcrawler. After fitting restraining bolts on the droids to keep them from leaving, the Jawas sold R2-D2 and C-3PO to Owen Lars to work on his moisture farm.

A Jawa from an animated movie 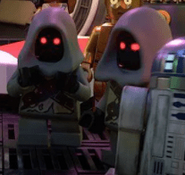 Offworld Jawas came as guests to the party.