Brickipedia
Register
Don't have an account?
Sign In
in: Class 4 articles, Space Police III minifigures, Minifigures introduced in 2010,
and 2 more

Jawson is a criminal alien minifigure of the Space Police III theme. He appears in all of the summer 2010 Space Police sets.

Jawson is a trusted henchman of the crook boss Brick Daddy. He is strong but silent and easily underestimated. Although Jawson isn't very bright, he will carry out any job Brick Daddy gives him to do. Jawson has broken into and out of the astro-jail several times. According to the LEGO Club magazine, he is allergic to anchovies. 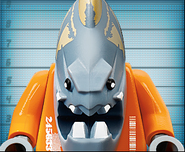