"Oh great, now they come in fun-size!"
―Jay about Min-Droid in "The Art of the Silent Fist"

Jay Walker is the blue ninja of lightning minifigure and character released in 2011 with the Ninjago Theme. He was the first of the ninja to learn Spinjitzu, and he has a crush on Kai's sister Nya. His parents are Ed Walker and Edna Walker.

As a normal ninja, Jay has the classic ninja wrap first used in the Ninja theme from 1998, but in blue for the first time. Jay's face print (which would normally be covered by the ninja wrap with the exception of his eyes) is made up of two black eyes with white pupils, a small, yet determined, frown with a line below showing a chin, and two eyebrows, one of which is cut through. His torso is a blue ninja robe with black hands and no back-printing. The printing that is on the front, reveals darker blue (Earth Blue) clothing under his robes. Also on the torso, is a little golden emblem, which is most likely a symbol of lightning in Ninjago, that also appears on Jay's spinner. Jay's legs in this variation are blue with a darker blue knot pattern printed on the hips and legs.

In the 2012 sets, he appears as a ZX ninja, a NRG ninja, and as a Kendo ninja. The Kendo variant has a face guard over his face and black armor fitted over his normal ninja clothes. As a ZX ninja, he can be seen with a new head-cloth with a metal point at the tip. Also, he had a re-designed torso, with a tucked cloth and a dagger sheath.

In 2013, his Elemental Robe variant was released. It is designed as a black robe with many blue colourings, and a blue headpiece. A silver crown is on it once again. His Ninja symbol is on his back surrounded by silver highlights.

In the Ninjago: Rebooted sets, Jay receives a makeover, like the other ninja. For the first time, his hair piece appears with him. His mask, like the other ninjas', is like the ZX/Kimono masks, but it does not cover his head, only the mouth. (Cyrus Borg claims it's to prevent facial recognition.) His torso features a strap with a symbol like that of his Kimono's (the word "lightning" in kanji), lightning bolts across his uniform (reminiscent of his NRG form), and clips fastening the straps to his shirt. His pants are solid blue. His back looks very similar to his Kimono form.

In LEGO Ninjago: The Movie, Jay was shown to be discovered by Sensei Wu while testing a glider he had recently invented. He was then brought to Wu's monastery to train in the ways of Spinjitzu. He trained alongside fellow students Zane and Cole. The three later attacked another that they found in the monastery. After a fight started between the four, Wu appeared to break it up and introduced the newcomer as his fourth student, Kai. Wu then announced to the four ninjas that the search for the Four Golden Weapons was about to begin.[1]

At the Caves of Despair, location of the Scythe of Quakes, after the scythe was recovered by the ninjas, they are attacked by an army of Skullkins led by Samukai, the king of the underworld. Jay notices the enemies to be just like the training course, and after going through the motions Wu taught him, he summoned a tornado of lightning corresponding with his element. In other words: he performed spinjitzu, followed by the others. Samukai and his legion retreat, as a dragon protecting the Scythe appeared behind the ninja. In desperation, Kai uses the scythe, despite Wu's instruction not to use the weapon's power, as no mortal could handle it. A rift appears in the cave ceiling, and the ninja manage to escape.[2] As the ninja are heading to the shurikens of ice, Wu teaches them the most powerful move in spinjitzu: the Tornado of Creation. The boat arrives, crashing into the island, and the ninja enter the frozen plains. Jay and the rest of the ninjas recovered the Shurikens of Ice. Next, At the Floating Ruins, they climb a giant nunchuck to the nunchucks of lightning, jumping down to escape the lightning dragon. The four use special inventions made by Jay, who made backpacks that spawn wings. The ninja are at such a high altitude that they are able to fly to all the way to the Forest of Tranquility, the location of the Sword of Fire. The group then go to sleep in the forest. Kai leaves while the others are asleep as he is under the impression that his sister, Nya is in the forest. Wu later leaves to follow Kai, while Jay, Zane, and Cole are still in slumber. Samukai and the army of Skullkins then arrive, steal three of the golden weapons, and tie the remaining members of the group to a tree. Jay grabs General Nuckal's sword and cuts the rope while the skullkins are not looking. The three ninjas then try to chase the Skullkins in their vehicles, but they escape to the Underworld[3]. The ninjas then go to the Fire Temple where Zane senses the location of the Sword of Fire. Kai and Nya then appear with the fire dragon. Jay then learned of the sacrifice that Wu made. The ninjas then retrieve their elemental dragons and travel to the underworld. While in the underworld, Jay battled the skullkins (once again) and giant spiders. He then witnessed Samukai defeat Sensei Wu and take the sword of fire from him. Samukai was then seemingly destroyed, but the combined power of the weapons allowed Lord Garmadon, Wu's evil brother, to escape from the underworld. Jay then travelled to Kai and Nya's village where he and the other ninjas were welcomed as heroes. Jay had a small moment with Nya, she tells him blue is her favorite color, and Jay replies YES! she also tells Kai and Jay she's happy they are back. Then they hit their golden weapons together creating an explosion.[4]

In the new Ninjago mini-movie, Rise of the Snakes, his opptomism reaches its' peak with the battle of the Serpentine. After the ninjas go to Jamanakai village to investigate the report of Lord Garmadon's return, the ninjas find Lloyd Garmadon terrorizing the villagers. After leaving him to the villagers, they find the scroll about the Green Ninja, he is the most intrigued. During the contest to decipher who it was, he lost first to Kai. After returning to Jamonicia village to investigate the Serpentine's return, he is relieved to see Nya has returned safely. Jay makes little appearance in this battle, only to say they are out of shape during the battle.[5]

In the second premier, Home, he is annoyed by Zane when he laughs at a movie when he and Nya are crying. He and the other ninjas train to unlock the golden weapons when Zane tells them to follow him. After arriving at Lloyd Garmadon's treehouse, he finds it very cool and interesting. Nevertheless, he follows the ninjas to destroy it. When Cole in hypnotized, he tries to shock him with lightning, to no avail. When Sensei Wu un-trances him, he is devastated that the Serpentine destroyed all their video games. After they discover Destiny's Bounty, he is the first to comment on the food.[6]

In the eighth episode "Once Bitten, Twice Shy", he takes Nya out on a date for the first time. But it doesn't go at all as planned. He begins to turn into a snake and is too shy to tell Nya. Then Nya is chained up by Pythor on a roller coaster leading to a circle of fire. He reaches his true potential when Nya kisses him (Which makes his heart rate go up rapidly, repelling the Fangpyre Venom) and he discovers that he just needs to be who he is.[7]

In NInjago: REBOOTED, Jay appears to be Cole's rival after finding out Nya has feelings for him.

"Shocked to see me?"
―Jay
"Why must we go through this again? I'm clearly the best! I mean, look at me!"
―Jay
"Wait until you see my new invention!"
―Jay
"All right guys, let's chop-socky this lemonade stand!"
―Jay
"We're savin' a girl? Is she hot?"
―Jay to Kai
"Ha! Tell me what?"
―Jay to Nya and Cole
"I should've packed an extra pair of underwear!"
―Jay
"Zane. No."
―Jay responding to Zane's joke

Jay from the TV show 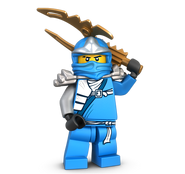 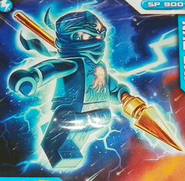 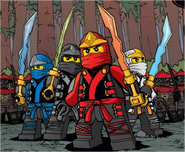 Jay and the others in the Temple of Light

Jay with the other ninja

Or should I say, I'd be shocked if we lose! 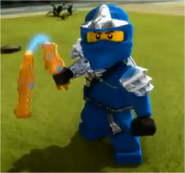 Jay in Day of the Great Devourer 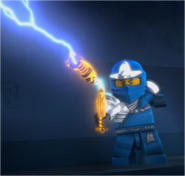 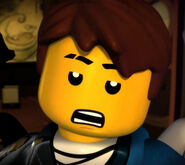 Jay poisoned and becoming a Fangpyre 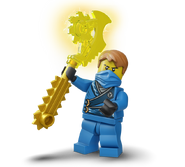 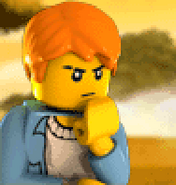 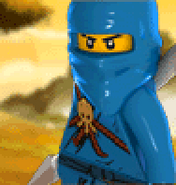 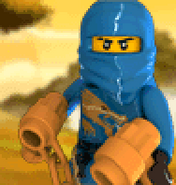 Jay as a DX ninja in LEGO Battles: Ninjago