This article is about the minifigure. For other uses, see Jayko (Disambiguation).

Jayko is a minifigure from the Knights' Kingdom II theme. He appeared in seven sets between his release in 2004 and the finishing of the theme in 2006. Three action figures were also based off him.

Jayko was the youngest of the four knights. His crest was of a hawk, and his power was speed. He was often called "The Rookie" in the 2004 storyline. He was known by the other knights as a hotshot and was quite a show-off. When Vladek captured King Mathias and took over Morcia, he, with the other three knights, rescued the king. King Mathias then sent them to collect the Heart of the Shield of Ages from the Citadel of Orlan. Once they had claimed it after succeeding from the many trials, the four knights returned to find that a new king was being decided by means of the Grand Tournament. Jayko entered the tournament and fought Vladek. Jayko defeated his opponent by using the Heart of the Shield of Ages, legally reinstating Mathias as the king.

During 2005, Jayko went with the other knights to attack the Dark Fortress. Danju was captured by Shadow Knights, so Jayko went to rescue him from the Scorpion Prison Cave. They returned to the Dark Fortress, and Jayko helped to lead the attack on the walls. Leaving King Mathias and the Morcian soldiers, Jayko went of and fought Vladek, smashing the Vladmask and defeating him. He was then crowned by King Mathias.

During the 2006 storyline, Jayko, now as king of Morcia, collected the pieces of the Vladmask, and they were recast into the Shield of Ages by a blacksmith at the Mistlands Tower. Jayko, along with his knights Sir Adric and Sir Kentis, then faced Vladek. They then used the Shield of Ages to trap Vladek inside a crystal ball, winning the battle. Jayko then properly knights Adric and Kentis as the other three original knights look on. Jayko steps out on the balcony of Castle Morcia beside a statue of Orlan, First Knight of Morcia, and recognizes the familiar face of the blacksmith. 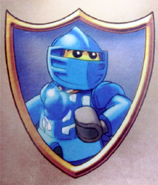