Jestro is a Nexo Knights minifigure released in 2016. He is the main antagonist of the theme until 2017, then becomes a supporting character in 2018 sets.

Jestro, the clumsy jester, performs at the royal court. Juggling all sorts of things. Even a smartphone?! Suddenly, the first time in a long, long time, Jestro finally gets a laugh out of the King and Queen. Unfortunately, they are not laughing at him, but at something they have seen on their tablets. Jestro withdraws to the shadows and starts plotting for revenge.

As an evil jester, Jestro's costume's main colors are red and purple. His face is white, with an large grin and several uneven teeth. His eyes are yellow with red irises and he wears clown lipstick. His outfit is tattered and torn, exposing blood red garments underneath, and his collar has skulls in place of bells. He has a damaged cape and a staff with a jester-hat topper. He wields the Book of Monsters, which summons lava monsters into the Kingdom of Knighton.

As a weatherman, Jestro's costume's main colors are yellow and purple. His face is transparent light blue, with pointed fangs. His eyes are yellow with black irises and he wears clown lipstick. Just as before, he has skulls around his collar, and his outfit is ripped, exposing parts of his light blue electrified skin. He has a damaged cape and a staff with a lightning bolt. He is with the Cloud of Monstrox, which summons stone monsters.

When Jestro is finally redeemed, his costume's main colors are orange and blue. His face is white, and he wears the clown lipstick. He has golden shoulder armor. He is with Clay and the Nexo Knights.

Jestro is the main antagonist of the Nexo Knights theme. In the TV series, it has been revealed that he was once an ordinary, if not rather self-conscious and shy, the jester until the Book of Monsters and Cloud of Monstrox convinced him to become evil. He and Monstrox then summoned the Lava Monster Army and Stone Monster Army into the Kingdom of Knighton to destroy the Nexo Knights. Clay, one of said knights, was actually a friend of his, who tried to encourage and help him before his unsuccessful performance that caused a power outage. Jestro is the supporting protagonist, he is the good jester. He would help the Nexo Knights. Jestro is with his friend Clay.

Jestro in the TV series.

Jestro after touching the Book of Evil. 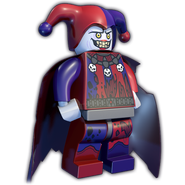 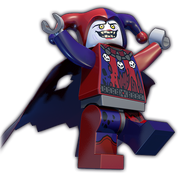 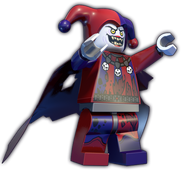 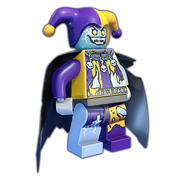 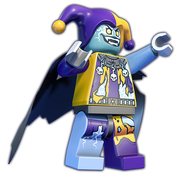 Français
Community content is available under CC-BY-SA unless otherwise noted.
... more about "Jestro"
RDF feed
Accessories
Staff
Book of Monsters
Nexo Blades Daggers +
Appearances
70316 Jestro's Evil Mobile
70323 Jestro's Volcano Lair
70352 Jestro's Headquarters
72006 Axl's Rolling Arsenal +
ArticleRating
3 +
Image
Jestro2018.png +
Img1
Jestro.png +
Img2
70352-jestro.png +
Img3
Jestro2018.png +
InfoboxTemplate
Minifigure +
ShopDescription
Cleverness: 4/10
Scariness:' … Cleverness: 4/10<br/>Scariness: 8/10<br/>Destroying: 1/10<br/>Evilness: 7/10Description No good at being nothing but no-good Jester <br/>Weapon Magic staff <br/>Skills Being bad at things<br/>Dislikes Being laughed at<br/>Likes To be bad<br/>Jestro is not bad. He is just no good at being good. Or funny for that matter. He was King Halbert’s jester and every day people laughed at him. Except for when he actually tried to be funny, then they fell silent. One day Jestro had enough and he seized the opportunity to become so powerful that no-one would ever dare laugh at him again.no-one would ever dare laugh at him again. +
Theme
Nexo Knights +
Title
Jestro +
Txt1
Evil Jester +
Txt2
Weather Master +
Txt3
Redeemed Jester +
Years
2016-2018 +
Advertisement