Jet Jack is a Ninjago: Masters of Spinjitzu Minifigure and a female Dragon Hunter introduced in 2018.

Jet Jack has a unique torso print, while her legs are the same used for all Dragon Hunter minifigures except Iron Baron and Daddy No Legs. Her head is a unique print, while her mohawk piece previously appeared on Eyezor and later on Mohawk of the Sons of Garmadon.

Another version of Jet Jack that reuses Iron Baron's torso piece but is otherwise identical to her set releases was later revealed as a bonus gift with issue #40 of LEGO Ninjago Magazine. She shares this torso with Nitro, who also has the same jet pack she does. 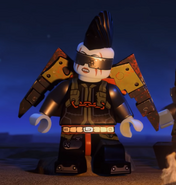 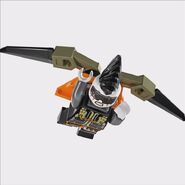