He is loyal to Davy Jones. His weapon is a whip. He was sadistic and harsh to his other crewmembers, whipping or locking them in the brig if he punished them. After Will Turner stabbed the heart he held, Boostrap Bill carved out his son's heart and placed it in the chest. 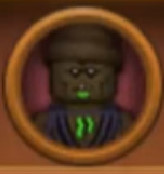 Add a photo to this gallery
Retrieved from "https://brickipedia.fandom.com/wiki/Jimmy_Legs?oldid=1717412"
Community content is available under CC-BY-SA unless otherwise noted.