"Why do I have to do everything?"
―-The Joker Henchman

The Joker Henchman is a minifigure from the Batman and Super Heroes themes.

In this variation, his torso is plain purple to match The Joker's jacket colour. Apart from this, he is basically the same as the Two-Face Henchman and Mr. Freeze Henchman, wearing black hats and shades, flesh hands, along with unprinted grey legs.

In this variation, the henchman's design are more detailed than the previous variation. He wears a lime green jacket with a zipper and pockets. At the back of the jacket is Joker's face printed against an orange circle with "The Joker" printed beneath it. Under the jacket he wears a white sweatshirt. His arms are also lime green. He has a black hat and black gloves. His legs are purple and unprinted. His head is light nougat with his face partly painted white, along with red eyebrows, blue eyeshadow, red lips, and red cheeks.

This variant will come with a construction hard hat. The face is similar to the previous, but bent into an angry expression. His torso is orange, printed with a orange construction vest, with purple taking place of bright green. He has a white shirt with light green stripes, white arms and black hands. The back is printed with The Joker painted onto the vest with runs on the bottom of the letters and the bottom of the vest is the word construction with the first three crossed out with replaced with "de" to create destruction. His legs are purple.

The Joker Henchmen are playable characters in LEGO Batman: The Videogame, but called Joker Goons, while Joker Henchman refers to a different character. The Joker Henchman looks like a clown with a purple beret, a stern white head with red lips, a purple torso with special design (green suspenders), purple arms, white hands, and green legs. They are also armed with a machine gun to fight the heroes.

In LEGO Batman 2: DC Super Heroes, the Joker henchman comes with at least three variations. One of the variations is identical to his appearance in the box set, but is only playable on handheld versions or using extra toggle.

The Clown Goon has an appearance very similar compared to the set, but his hat is replaced by the hairpiece previously used by Circus Clown and his head is completely painted white, showing only his eyes and mouth.

The Mime Goon has a totally different torso, a black jacket with yellow edges and buttons, a shirt with black and white stripes. The back printing of his is similar to the standard variation, but the backcolour is purple instead of lime green. The head completely painted white and wears the Mime's beret, using his arm printing and white hands on the console versions. He has unprinted black or purple legs.

The Heavy Joker Goon is almost identical to the mime goon, but only appears in handheld versions of the game. He has an evil grin and the purple lining on his shirt is replaced by lime green lining.

In LEGO Batman 3: Beyond Gotham the Joker Henchman is in a variation of the 2012 suit. But this time he has space gear on it. Among the lime-green coat is the ever so familiar Joker face logos on both sides and on both arms. The henchmen have beanies and space helmets in some variations. They have purple hips and legs also with space gear sprawled among them. Their weapons are the new "stud-shooters" often featured in 2014 Star Wars sets. Their faces are tan with white makeup along the face, much like their 2014 counterpart.

In LEGO DC Super-Villains the Joker Henchman looks similar to the box set version; with a lime green jacket with a zipper and pockets and a white sweatshirt underneath it along with purple trousers, black gloves and a black cap. At the back of the jacket is Joker's face printed against an orange circle with "The Joker" printed beneath it. One difference from the previous games is that the Joker Henchman now wields a red flintlock pistol as his weapon of choice. A second variation of the Joker Henchman also exists, which replaces the regular lime green jacket with one that has red stripes and purple pockets and details.

The Joker Henchmen are Joker's henchmen. They serve multiple purposes, sometimes as guards, sometimes to fly the Joker's Helicopter and other miscellaneous jobs. Most often, however, they function as enemies to fight the player, using either guns, melee weapons and other gadgets. In other circumstances they function as muscle; as a labor force to do the heavy lifting and grunt work, freeing up Joker to pursue his schemes at his leisure.

The Super Heroes variant's back printing

Joker testing gas on a goon 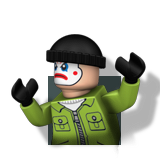 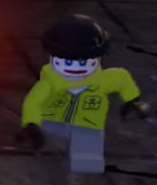 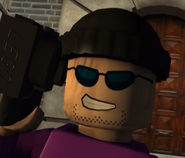 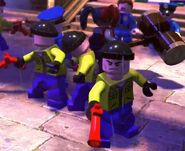 Lawrence in The LEGO Batman Movie.