Brickipedia
Register
Don't have an account?
Sign In
Advertisement
in: Class 3 articles, Pirates of the Caribbean Minifigures, Minifigures introduced in 2011
English

Joshamee Gibbs, called Mr. Gibbs in the video game, is a Minifigure in the Pirates of the Caribbean theme. Gibbs used to serve the imperial force with Admiral Norrington, but later joined Jack Sparrow as the first mate on The Black Pearl. He has large mutton chop sideburns and aged grey hair. The theme and Minifigure were released in May 2011.

Joshamee has the same hair as Will Turner, but in grey. He has large sideburns and a double sided face, one side with a serious expression and the other has a scared expression. He has a dark gray sleeveless jacket with silver buttons and a dark tan shirt with a white/grey necktie and brown belt. His legs are light grey.

Joshamee Gibbs is a recurring character in all five Pirates of the Caribbean movies. Gibbs was a member of the royal navy and crossed from England to the Caribbean with Governor Weatherby Swann and Admiral Norrington. He gives the ship's crew insight into pirates. In Later, he has been dismissed from the navy and lives in Tortuga. His close friend, Jack Sparrow gets him to find a crew, which he makes Gibbs his first mate, to pursue Hector Barbossa. After the crew are captured by the undead crew of the Black Pearl, they are imprisoned in the ship. Elizabeth Swann later frees them but cannot pursuade them to rescue Jack and Will Turner. They leave Isla De Muerta with the Pearl. They later rescue Jack from Port Royal after he was to be hanged.

Later, he and the crew feel as though they are not earning the plunder they deserve as a crew. After escaping from Pelegosto and Jack's deal with Davy Jones, he organises to gather the 99 souls Jack requires, among them being a disgraced Norrington. After the Kraken attacks the Black Pearl, Gibbs is unsure about sacrificing the ship, however agrees. After Jack's death, he is the first to agree to go rescue him. He later assists Barbossa and his plans to acquire Sao Feng's navigational charts, a ship and a crew. He informs Jack about his predicament in the Locker, which the hallucinated Jack is unaware of. He joins Jack's crew again during the meeting of the Brethren Court and the battle of Calypso's Maelstrom. After Barbossa commits a second mutiny, he leaves Gibbs behind in Tortuga, where he resides again after a farewell to Jack.

Later he is sentenced to hang in London but escapes with Jack. When Barbossa is sent out in pursuit of Jack, he forces Gibbs to come along, as he has knowledge of Jack and his plans in relation to the The Fountain of Youth. He follows Barbossa from London, to Whitecap bay, where their ship is destroyed by mermaids, then to the Spanfish camp where he leaves Barbossa to go with Jack, but later ends up on the Queen Anne's Revenge where he steals the Black Pearl in a bottle. He later abandons Jack Sparrow after a failed bank robbery. He and the rest of the crew, however, still end up accompanying Sparrow on his quest for the trident of Poseidon, as Henry Turner pays them to rescue him from the gallows. They end up abandoning Jack again when they find out that the undead are chasing Sparrow, however they are captured by the British Royal Navy. They manage to ecape the Navy ship, the Essex, before it is blown up by Salazar, and they row to the Black Pearl. Accepted into Jack's crew again, they rescue him from the undead Silent Mary crew and end up remaining with Jack. Gibbs is last seen with Jack as they sail into the horizon. 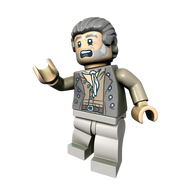 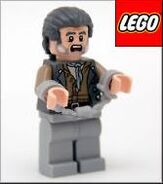 Gibbs in LEGO Pirates of the Carribean: The Video Game

Gibbs with Jack and Will at Cannibal Island 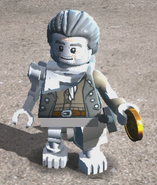