The Judo Fighter is a minifigure introduced in 2012, as part of the 8909 Team GB Minifigures, released to coincide with the 2012 Summer London Olympics.

The Judo Fighter has white legs, the upper sections of which are printed with the her sash, which hangs down from her torso, about which it is tied. Her torso is also white, and features the previously-mentioned black sash, as well as an Olympic logo on the upper left-hand chest. Her arms are white, and her hands yellow. She has the same yellow face as Tennis Player, and has black hair. She wears pink lipstick, and has a red and gold medal. 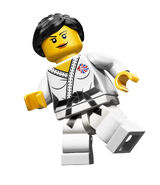