Brickipedia
Register
Don't have an account?
Sign In
Advertisement
in: Class 3 articles, Make and Create, Minifigures introduced in 2003

Junkbot is a robot who eats trash and works in an unnamed factory, presided over by the Bossbot. He stars in the online games Junkbot and Junkbot Undercover, both of which have been removed from the official LEGO site.

Junkbot was physically released in the 2020 set 10273 Haunted House.

In the first game, Junkbot is simply searching through the factory he works in for the trash he loves to eat, while avoiding enemies and hazards.

In Junkbot Undercover, Junkbot is still attempting to find tasty trash to eat, but at the same time, he is investigating the mysterious "Project X".

In the games, Junkbot will simply move straight forward, until he either encounters an obstacle he cannot climb over (in which case he turns around), or encounters an enemy (any robot other than Junkbot himself), or a hazard (such as a laser, a dripping pipe, a fire block, etc). If he runs into an enemy, he will die (unless he is protected by an "S" (shield) block). The same goes for hazards. 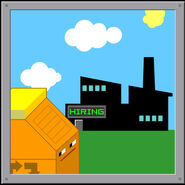 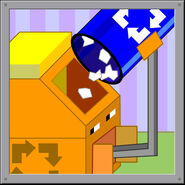 Article in How Magazine