In the Chamber of Secrets, he was petrified by seeing the Basilisk through Nearly Headless Nick. He along with Mrs. Norris, Colin Creevey, Hermione Granger, and Penelope Clearwater were unpetrified when the Mandrake draft was finished. Justin is a muggleborn: a witch or wizard who has muggle parents.

In LEGO Harry Potter: Years 1-4, when Hermione Granger leads you to the potions classroom, he gets added to your party while in the classroom, so you can unlock the Hufflepuff painting on the wall which only corresponds to Hufflepuff students.

In LEGO Harry Potter: Years 5-7, he is unlocked in one of Professor Flitwick's classrooms. 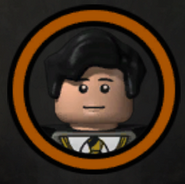