Justin Hammer is the CEO of Hammer Industries, a British Industrialist and the main business rival of Tony Stark in the technology market. At times, he has gotten Stark technology through industrial espionage and has sold it to supervillains.

The Detroit Steel Armour in the comics was created by Justin's daughter Justine and his granddaughter Sasha in-order to be used by mercenaries to kill Iron Man with Sasha Hammer ultimately taking up the mantle herself.

In Avengers Assemble he and Super-Adaptoid are voiced by Jason Spiask who also voices Wally West in Young Justice, Scorpion in Marvel's Spider-Man animated series and video game, The Penguin in Batman: The Telltale Series, The Joker in Batman: Hush and Loki in Marvel Ultimate Alliance 3: The Black Order. 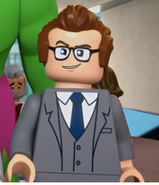 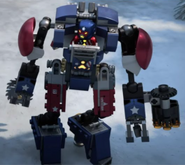