The Hobbit: An Unexpected Journey
The Hobbit: The Battle of the Five Armies

Kíli is a minifigure from The Hobbit: An Unexpected Journey released in November 2012. He first appeared in the first wave of the The Hobbit in 79001 Escape from Mirkwood Spiders.

Kíli has black short legs, and a brown torso piece. The torso has printing present on the front, depicting a brown quiver strap with various white details and a grey buckle. He has a brown jacket with a few buttons and some more white detailing and what seems like a black shirt underneath, a little bit of skin is show at the neck line. His hands and headpiece are flesh-coloured. The headpiece features black eyes with white pupils, thin black eyebrows, some black stubble, and dark skin colour for the outlining of facial features. He has a new hair piece, long wavy black hair thats half tied identical to Thorin Oakenshield's. The mouth has an angered expression showing his teeth. Kíli comes with two accessories; a short brown bow and arrow and a brown Quiver.

A Kíli microfigure was released in the game 3920 The Hobbit: An Unexpected Journey. It is dark blue, with face and stubble printing on the front of the head area and some some hair peering out from his hood, and a black strap with a brown jacket on the body which also continues onto the legs.

Kíli was one of Thorin Oakenshield's nephews and the younger brother of Fíli, being the son of Thorin's sister Dis. He was one of the thirteen companions of Thorin on his quest to recover Erebor. Along with his brother, he found the goblin cave in the Misty Mountains which they entered to get away from the storm, but were then captured by the goblins.

Later, while attempting to open the river gate so that his companions can escape from the elves, Kíli is shot in the leg with a poisoned orc arrow. He becomes a burden and instead of going to the Lonley Mountain, he stays behind in Lake-town with his brother Fíli, Bofur, and Oin. Kíli was eventually killed in the Battle of the Five Armies defending Thorin, and was buried with honor. 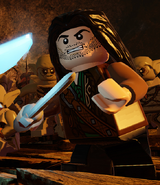 Tauriel rescuing Kili in the LEGO The Hobbit: The Video Game trailer

Aiden Turner with his minifigure counterpart at the Zurich premiere of The Hobbit: The Desolation of Smaug

Deutsch Français Nederlands
Community content is available under CC-BY-SA unless otherwise noted.
... more about "Kíli"
RDF feed
Accessories
Bow and Arrow
Quiver +
Appearances
3920 The Hobbit: An Unexpected Journey
79001 Escape from Mirkwood Spiders
79018 The Lonely Mountain +
ArticleRating
2 +
Image
Lego_kili.png +
Img1
Killi.jpg +  and KiliVideogame.png +
Img2
Kili microfig.jpg +  and Kili lt.png +
Img3
Lego_kili.png +
InfoboxTemplate
Minifigure +
ShopDescription
Kili Kíli is the younger brother to … Kili</br></br>Kíli is the younger brother to Fíli. He is a loyal nephew to Thorin Oakenshield. Carefree and somewhat reckless, Kíli has led a charmed and untroubled life to this point. He is quite good-looking, strong, and agile as few, if you ask him. He likes to have fun, and nothing can break his spirit. He is a skilled fighter and expert archer, who trained with weapons from an early age. As one of the youngest in The Company of Dwarves, Kíli is determined to make his mark and prove his worth.ined to make his mark and prove his worth. +
Theme
The Hobbit +
Title
Kíli +
Txt1
Minifigure +  and Regular +
Txt2
Microfigure +  and Lake-town +
Txt3
Armoured +
Variations
Minifigure
Microfigure +
Years
2012, 2014 +
Advertisement