K-3PO is very similar to other protocol droids, but is white, with two red markings on his right chest - indicating his rank as Lieutenant.

K-3PO, or Kay-Threepio, was a white, older model 3PO-series protocol droid who became one of the most valued droids to serve the Alliance to Restore the Republic. K-3PO was originally owned bystarfighter pilot Arhul Narra, who used K-3PO as a repository for his personal files while fighting for the Old Republic during the Clone Wars. When Narra later joined the Rebel Alliance, he maintained detailed records of his service with the Rebellion, which often included top-secret data that he kept only in shielded files within K-3PO. As K-3PO accumulated thousands of files over the years, the military tactics contained within began to seep into his comprehension circuits. Consequently, K-3PO became a tactical expert, and so Narra refrained from performing a memory wipe on his droid, whose military value increased every day. After an offhand remark K-3PO made to Narra during the Battle of Ton-Falk prior to the Battle of Yavin revealed a simple tactic that the Alliance exploited to defeat a sizable Imperial force, K-3PO became one of the few droids granted the honor of "recognition" by Alliance High Command. K-3PO served as the coordinator of all droids in High Command at the Alliance headquarters on Yavin 4, Thila, and finally Hoth, where he was placed in charge of the Echo Base droid pool. Although K-3PO was destroyed during the Battle of Hoth, his salvaged memory would later serve Rogue Squadron through the unit's protocol droid, M-3PO. 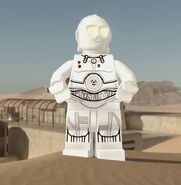