K8761 The Shadowed One is a BIONICLE set that was exclusive to LEGO Club members released in 2006. It was featured in the March-April issue of the LEGO Magazine and contains a model of the "Shadowed One", leader of the now-defunct Dark Hunters in the BIONICLE universe. Although being released as a separate set, the model can also be built using the pieces from 8755 Keetongu and 8761 Roodaka, and the instructions were included in Roodaka's instruction booklet.

Much of the Shadowed One's life is shrouded in mystery. He and his fellow Dark Hunter co-founder, Ancient, originated from the same island, a bleak, icy realm. A great deal of his early life was spent performing tasks that neither the Brotherhood of Makuta nor Matoran would take upon themselves to do. At the end of a civil war in their homeland, the Shadowed One met with Ancient, and together they came up with the idea of creating the Dark Hunters. Journeying together, the two discovered the island of Odina, where they seeded the base of their new organization. He began a tome chronicling the histories and profiles of the beings he recruited into the Dark Hunters.

During an experiment to produce more effective Dark Hunters, he created the being Sentrakh, who has served as his bodyguard ever since. Some time after this, he had several operatives sneak into Metru Nui and steal the Staff of Artakha, which he later gave to the Vortixx as payment for some weapons.

The Shadowed One was present when the Piraka were inducted into his organization, annihilating another member for letting slip the location of the Makoki Stone. He personally welcomed Hakann and Vezok, testing their lack of morals. The Shadowed One was later informed of their planned rebellion, but allowed the plot to go through. After they had penetrated his fortress, he used his power over the architecture to lead the rebels into a winding maze, eventually depositing them in his chambers. Intending to punish them for their betrayal, the Shadowed One lashed out at Zaktan with his eyebeams. However, instead of killing him, the beams split Zaktan into billions of Protodites, something even the Shadowed One was not expecting. He let the rebels live, issuing only a warning to them.

The Shadowed One later sent Avak, Vezok, and Reidak to Metru Nui to release the Kanohi Dragon, in an attempt to force the city to accept the Hunters as its protectors. However, its ruler refused to let them use the city as a base, instead calling a team of Toa as reinforcements. Having lost this chance to take the city, the Shadowed One soon became obsessed with conquering it, launching several attempts to secure a base there. After a failed kidnapping of Dume, the leader of the Hunters launched a full scale invasion, inciting the Toa/Dark Hunter War.

The war raged for several weeks, with no clear victor on either side. Having sent most of his available operatives, the Shadowed One knew that he needed to end the war soon. He got his chance when an embittered Toa of Air, Nidhiki, offered to betray his fellow Toa in exchange for rule of the city. Though the Shadowed One never intended to let him have this, he let the deal proceed. Neither side got to keep their agreement in the end, as the army's leader discovered the treachery, and agreed to let the Dark Hunters leave the city safely, in exchange for the Makoki Stone. The Hunters left, and the war ended. However, the Shadowed One was not content to leave the Makoki Stone in the hands of the Toa and had it stolen back six months later, breaking it into six pieces and auctioning them off.

He was soon confronted by Nidhiki, whom the Shadowed One knew had a problem with a fellow member named Krekka. Knowing that the Toa of Air was a potential problem given his history as a traitor, the Shadowed One partnered them up, knowing Krekka's blind loyalty and stupidity would keep Nidhiki in check. At some point, he assigned them and Lariska to steal a prototype Zamor Launcher, which they successfully managed to do. Soon after that, he was approached by Roodaka, who wanted training without actually joining the organization. Initially refusing, the Shadowed One soon saw an opportunity when she informed him that Nidhiki was attempting to leave, and granted her training on the condition that she mutate Nidhiki, forcing him to remain in the organization.

War with the Brotherhood

Several thousand years later, the Shadowed One hired out Nidhiki, Krekka, and Eliminator on Teridax's request. However, two members of the team, Nidhiki and Krekka, never returned from their mission, prompting the Shadowed One to leave with his most trusted operative, Sentrakh, in a search for them, believing a Toa had killed them. Leaving Lariska in charge, he, Sentrakh and Voporak departed for Metru Nui. Voporak soon found the Vahi, and returned to the Shadowed One to hand it over. While searching Metru Nui, he and Sentrakh saw Toa Vakama conversing with a Visorak. Confused by the strange behavior, the Shadowed One realized that Teridax had constructed an illusion, and trapped the Toa inside. The Shadowed One was soon confronted by Teridax who began bargaining for the Vahi, but, with help from Vakama who had broken free of the illusion, the Shadowed One realized that Teridax was responsible for the death of his two Hunters. In the ensuing battle, the Shadowed One managed to pierce Teridax's armor with his eyebeams, and disintegrated his wings. However, Vakama swooped in on his Disk Launcher's jetpack function and stole the Vahi, which the Shadowed One responded to by damaging the jetpack beyond repair with his eye beams. Teridax, after knocking Voporak out, threw the leader of the Dark Hunters onto Voporak's prone figure, causing the Shadowed One to age three thousand years in mere seconds. Their fight over, Teridax left to retrieve the Vahi from Vakama. The Shadowed One declared vengeance, and a millennium long war began between the Hunters and the Brotherhood.

One thousand years after that, the Piraka defected from his organization, prompting the Shadowed One to send operatives to find them. He also learned of Toa Takanuva's defeat of Makuta Teridax, and developed a respect for the Toa of Light as he defeated Teridax when the Shadowed One himself could not. After receiving a message from Hakann, the Shadowed One entered Vezon into his tome of Dark Hunters, but later ripped out the entry and burned it when Vezon did not return to him with the Ignika. The Shadowed One also sent operatives to the Piraka's homeland of Zakaz, though these members have since been killed.

The Shadowed One greeted the Toa Nuva as they came to his fortress seeking the Staff of Artakha. He informed the Toa that he had sold the Staff long ago to the Vortixx, and told them where it was located in exchange for them doing him a favor, which was to eliminate Roodaka, as he had found out that she had been dealing with both sides of the Brotherhood and Dark Hunter war. However, Pohatu used his power to cause the fortress to crumble after they left for Xia, causing some damage to several members, as well as angering the Shadowed One. The Dark Hunter leader quickly gathered his forces, and set them at work building a new one. Soon after that, he was approached anonymously by a mysterious organization, who requested a member willing to join a suicide mission against the Brotherhood of Makuta. The Shadowed One lent them one of his best operatives, Lariska.

The Shadowed One remained on Odina, overseeing the repairs to the fortress, debating on how best to continue the war against the Brotherhood of Makuta. Later, Ancient approached him, and requested that he assist the Order of Mata Nui. The Shadowed One agreed, and organized a fleet of ships. He and his army made their way to Xia, ready to destroy the island to ensure that the Vortixx didn't provide any more weapons for the Brotherhood. Upon arriving, he was confronted by Iruini, who used his Kualsi to teleport onto the Shadowed One's vessel, only to find himself surrounded by Dark Hunters.

Just after Iruini arrived, Helryx appeared on the Shadowed One's ship as well, and overheard him telling Iruini that, though he was told to occupy Xia, he intended to destroy it. Helryx then created a tidal wave large enough to destroy the entire fleet, and, after brief discussion, convinced the Shadowed One to follow her orders as she gave them.

While waiting on the island, the Shadowed One grew bored, and decided to explore the factories of Xia. He found a Vortixx trying to excavate a hole, and offered his help. When the Vortixx refused desperately, The Shadowed One gagged him and began continuing the work. He eventually unearthed a small metal box with a Brotherhood of Makuta insignia on it. He opened the crate, and discovered that it contained several viruses which Makuta Kojol had brought to Xia many years ago. He then killed the Vortixx. Ancient soon approached the Shadowed One, inquiring of his work. The Shadowed One informed the Dark Hunter of what he had found and planned on doing, then killed his old ally to keep the secret.

Upon returning to the main factory, the Shadowed One was confronted by Kalmah, Ehlek and Mantax. The Barraki suggested an alliance between the two factions, for which the Shadowed One demanded something in return. The Barraki informed him that they knew of the virus he had discovered, and that they had the knowledge of how to use it. The Shadowed One, sensing a beneficial alliance, agreed to meet with their leader, Pridak, in Karzahni. Following Teridax's takeover of the universe, the Shadowed One gathered his Hunters to Xia as their new base of operations.

After the Battle of Bara Magna, which resulted in Teridax's death and the evacuation of the Matoran Universe's inhabitants, The Shadowed One is now living somewhere on the now-reformed Spherus Magna. According to rumour, he is building a new army of rogues there. (Note: When asked if this organisation would still be called the Dark Hunters, Greg Farshtey replied "No, I do not believe so. I think a new time and a new place would call for a new name.")[1]

The Shadowed One was one of the survivors of Mata Nui's death in The Kingdom Alternate Universe. After they all moved to the island of Mata Nui, the Shadowed One became a part of the ruling council of the newly founded Kingdom of the Great Spirit.

In the Toa Empire Alternate Universe, the Toa Empire invaded Odina, but the Shadowed One managed to escape with help from Toa Naho. He then went into hiding. His staff, however, is held in the Archives as a trophy.

In addition to formidable strength, the Shadowed One has a variety of powers which include disintegrator eye beams. His Rhotuka spinners create a temporary madness within the targets.

The Shadowed One is a very charismatic leader, but easy to anger. He is also a very prideful being, and refuses to let his honour be slandered by his enemies. He enjoys pairing foes or very different Dark Hunters together, both for character building and his personal amusement. His real name is shrouded in mystery, and was only known to be known by the now-deceased Dark Hunter codenamed Ancient.

The Shadowed One possesses a powerful tool known as the Staff of Protodermis that creates solid, crystalline Protodermis. The staff also has a built in Rhotuka Launcher. 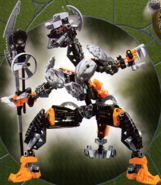 The Shadowed One as featured on box art.

The Shadowed One as he appears in BIONICLE: World.