"You thought I was hot before, well now I got a dragon and I'm really on fire!"
―LEGO Club Magazine November/December 2011

Kai is a red ninja minifigure released in 2011 as part of the Ninjago theme.

Kai appears in three physical variations; as a normal ninja, as a DX Ninja, and as a Microfigure.

As a normal ninja, Kai has the classic ninja wrap first used in the Ninja theme from 1998 in red. Kai's face print (which would normally be covered by the ninja wrap, with the exception of his eyes and eyebrows) is made up of two black eyes with white pupils, a frown, and two eyebrows, and a scar going down his face and through his left eye. His torso, is a red ninja robe with black hands and no back-printing. The printing that is on the front, reveals darker red clothing under his robes. Also on the torso, is a little golden emblem, which is most likely a symbol of fire in Ninjago, that also appears on Kai's spinner. Kai's legs in this variation are red with a darker red knot pattern printed on the hips and legs.

As a DX ninja, Kai uses the same face and headgear as his first variation, but utilizes a special torso and legs combination. Kai's DX torso features printing on both the front and back; on the front, a golden depiction of the fire dragon. On the back, the name Kai is printed on in gold with the ninjago fire emblem below. On the legs, there is a different knot print, this time tied to his right side. Also on the legs, is a continuation of the fire dragon design, here the tail is printed.

Kai as a Microfigure is a basically Kai as a normal ninja in a smaller scale.

In Ninjago: Masters of Spinjitzu, Kai appeared as a normal ninja, a DX ninja, a blacksmith, and a Samurai. As a blacksmith, he wore orange overalls. As a Samurai, he wore hand crafted samurai armor over his blacksmith clothes to defend the village against the Skulkins. He was also given a never before used brown hair piece when he removed his head gear. Kai as a normal ninja and DX ninja was identical to his set appearances.

Kai is the Ninja of Fire brother of Nya. He was a blacksmith before apprenticing himself to Sensei Wu. Kai is fiery in both fighting style and temper and a very independent character. However, he eventually gained control over his impulsive tendencies.

In Ninjago: Masters of Spinjitzu; Kai and his sister, Nya, were working in their family blacksmith shop, Four Weapons. They were approached by Sensei Wu who showed disdain for the weapons they made, saying they are useless in the art of stealth. He also says there are only tools/weapons for a samurai, but nothing for a ninja. Kai drove him off, who in turn disappeared when Kai turned his back. Moments later, a dark cloud appeared over the village, with local farmers being the first to notice. On the edge of the hill, a large vehicle (the Skull Truck) appeared along with many motorcycles, all with skullkin on board, notably General Nuckal, Kruncha, and Samukai. The farmers attacked the skullkins, only to run at the last second. Then, Kai, wearing hand-crafted samurai armour, helmet, and sword, engaged in battle, with Nya joining in. Kai was nearly killed by Samukai, only to be saved by Sensei Wu, who reappeared just in time. He is not able to save Nya, as she is kidnapped under the orders of Lord Garmadon. Sensei tells Kai in the story of Ninjago.

After telling Kai the story, he told him Kai's father had a map made by Sensei Wu to hide the Golden Weapons, also, Garmadon had struck a deal with Samukai, and that Wu was the younger brother. Kai at first refuses to get involved, until realizing he wouldn't stand a chance. He trained in Wu's monastery, and after completing his training, he awaits a final test, but is told he has already learned spinjitzu. Later that night, Kai was ambushed by three ninjas, and the ensuing battle causes him to be thrown out onto the training grounds. Kai activated the training course and the obstacles disarmed the attackers. Moments later, Sensei Wu stops the fight, revealing that the three are his other students. He used spinjitzu to transform their black ninja outfits into colored ninja outfits. The four are introduced to each other: Cole, the black ninja of earth, who is solid as rock; Jay, the blue ninja of lightning; Zane, the white ninja of ice and seer with a sixth sense; and Kai, the red ninja of fire. Introductions were cut short as Wu announced the search for the golden weapons has begun.

The first destination was the Caves of Despair, where Kai raced off in hopes of finding Nya. Instead, he nearly was caught by the skullkin Krazi who was about to raise the alarm, had it not been for the other three messing up the skeleton and shoving its Bone weapon into its mouth. As the four capture the weapon, they were attacked by Samukai and a whole legion of skullkins. Jay noticed the enemies to be just like the training course, and after going through the motions Wu taught him, he summoned a tornado of energy corresponding with his element. In other words: he performed spinjitzu, followed by the others. Samukai and his legion retreated, as they saw the Earth Dragon guardian of the Scythe appear behind the ninja. In desperation, Kai used the scythe, despite Wu's instruction not to use the weapon's power, as no mortal could handle it. A rift appeared in the cave ceiling, and the ninjas managed to escape. Sensei Wu becomes angry at Kai for using the weapon's power.

As the ninjas were headed to the shurikens of ice, Wu taught them the most powerful move in spinjitzu: the Tornado of Creation. The boat arrived, crashing into the island, and the ninjas entered the frozen plains. The three yet again escape another dragon, as Zane was frozen upon contact with the weapons, and the others used him as a snowboard, with the weapons being in their possession, they continue on. At the Floating Ruins, they climbed a giant chain to the nunchucks of lightning, jumping down to escape the lightning dragon. The four use special inventions made by Jay, backpacks that spawn wings. The ninjas are at such a high altitude that they were able to fly to all the way to the Forest of Tranquility, the location of the sword of fire. After everyone fell asleep, Kai was awoken by none other than Nya. She ranaway, and Kai chased her through the forest, eventually entering the fire temple. Nya was then revealed to be an illusion made by Lord Garmadon in a shadow form. He exploits the fact that Kai had forgotten his sword, and that the real Nya is hanging from chains above the lava. Garmadon tells him the only way to save Nya is to pull the Sword of Fire out of its rock. Kai obtains the sword, cuts Nya free, and was then confronted by solid shadows. Wu arrived and attempted to take them out, but the dragon appeared. Sensei decides to make a sacrifice and jumps on a rock that was headed down a lava fall so he may bring the sword to the Underworld. Kai tried to ask Sensei if there is another way and blamed himself for going after Nya alone, but its too late. The other ninjas then traveled to the Fire temple where Zane sensed the Sword of Fire was. Kai and Nya then appeared with the fire dragon. After the others get the dragons of their respective elements, they go to the underworld where they then battle the skullkin army and giant spiders using the Tornado of Creation. The Kai and the other ninjas then entered Garmadon's throne room where they witnessed Samukai defeat Wu. Samukai then grabbed the Sword of Fire. He planned to destroy Garmadon with the weapons but soon disentigrates from all of the power streaming into him from all the Golden Weapons and in his place is a portal which Garmadon goes through to escape the underworld. When he is gone, Sensei Wu informed that he will return one day. The four ninjas then return to Kai and Nya's village where they are welcomed by Nya and the villagers as heroes.

In the Spinjitzu Smash! online game, Kai was a playable character. He traveled to reclaim the sword of fire from the Skullkins with guidence from Sensei Wu and Lloyd Garmadon.

In the Spinjitzu Smash! DX sequel, Kai and the other ninjas traveled to the underworld to rescue Nya and the golden weapons from the Skullkins and giant spiders. While in the underworld, Kai reconnected with his late father, whose spirit helped guide them.

In the new Ninjago mini-movie, Rise of the Snakes, he and the other ninjas go to investigate the report of lord Garmmadon's reutrn. They go to Jamonicia village to see Lloyd Garmadon , his son, terrorizing the people. After leaving him to the villagers, he find the scroll decrypting the coming of the Green Ninja (Ninjago). He asks himself if he sill become him. After beating Jay, he faces off against Cole, during which his sword nearly burns down the entire monastery. Afterwards, Sensei Wu claims the Serpentine are back, and upon return to Jamonicia village, encounter the Hypnobrai tribe. Kai's appearance in this battle is limited, only to show that his Spinjitzu is too unstable to control. After the battle, he asks Sensei Wu to teach them the secrets of the golden weapons.

In the second premiere of Rise of the Snakes, Home, he and the other ninjas make fun of Zane for his odd behavior, Kai's case is when Zane left a mysterious note that he "consumed the last of the deli meat. Cheese?". When they follow Zane to the treehouse of Lloyd Garmadon, he is the first to cut the ropes. After Cole is pitched against the others as a distraction, he refuses to use his sword in fear of destrying the entire place. After Sensei Wu un-trances him, they return to see the monastery in flames. Kai is the first to turn on Zane. After Zane flies off, he and the other ninjas take shelter and see Zane approaching them. After he explains that he flew off to see the falcon, he leads them to their new home, the ship Destiny's Bounty. 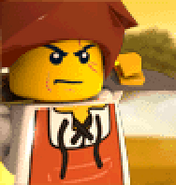 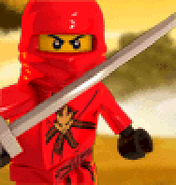 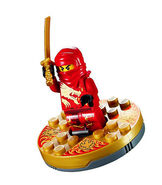 Kai with the sword of fire 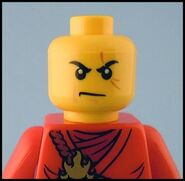