"You were right. I was a coward. But now I know there's something stronger than fear, FAR stronger...the Force."
―Kanan to the Grand Inquisitor in Fire Across the Galaxy

Kanan Jarrus is a Minifigure introduced in 2014 as part of the Star Wars Rebels subtheme.

Born as Caleb Dume, Kanan was a male Padawan to Council member Depa Billaba. After witnessing the death of his master during Order 66, Caleb Dume went into hiding and eventually renamed himself "Kanan Jarrus", during this time he forsook Jedi ways for sometime, replacing his lightsaber for a blaster.

Eventually, Kanan would become a freighter pilot for the coporation Moonglow Polychemical in the Gorse system piloting Moonglow-72. After getting caught up with a ragtag rebellious group consisting of the Twi'lek pilot, Hera Syndulla, the theorist Skelly, and the shift leader Zaluna Myder, Kanan helped prevent the imperial Count Denetrius Vidian from destroying Cynda. During the conflict, Kanan made the decision to accompany Hera Syndulla on the Ghost which he would eventually command along side her.

While cocky and often sarcastic, Kanan was eager to help out and fight against the Galactic Empire. Five years before the battle of Yavin, Kanan met Ezra Bridger, a fourteen year old force sensitive human whom he decided to mentor.

Kanan was eventually blinded by Darth Maul, but learned to rely on his connection to the Force to make up for his loss of sight. He regained his sight as he sacrificed himself to save the Rebels . . . and his fiance, Hera . . . from the explosion of a fuel cell.

Kanan has hair piece which is the appears to be a new mould. He has an olive green torso which is printed to depict a green shirt and a dark shoulder armour. He also has grey legs with a holster printed on. He wields a blue lightsaber And a medium blaster rifle.

Although Kanan has brown hair in the Star Wars Rebels series, the minifigure version was released worldwide with black hair. A few months after release, Kanan was re-released with brown hair. Parts were available on the LEGO.com site for replacements. 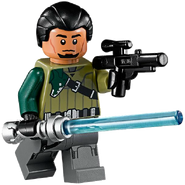 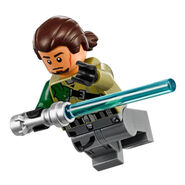 Kanan's front and back side face. 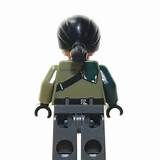 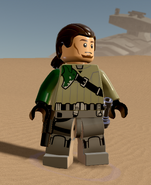 Français Nederlands Polski
Community content is available under CC-BY-SA unless otherwise noted.
... more about "Kanan Jarrus"
RDF feed
Accessories
Blue Lightsaber +
Appearances
75053 The Ghost
75084 Wookie Gunship
75141 Kanan Speeder Bike
75170 The Phantom +
ArticleRating
4 +
Image
'"`UNIQ--tabber-00000001-QINU`"' +
InfoboxTemplate
Minifigure +
ShopDescription
Kanan Jarrus survived the Emperor’s purge, … Kanan Jarrus survived the Emperor’s purge, going underground for years and hiding the truth about who he really was. To keep his past a secret, Kanan carried a blaster – an uncommon practice for a Jedi – and used a lightsaber that had to be assembled. He was a leader among the Ghost crew, a small group of rebels looking to strike back against the Empire, and with the emergence of the Force-sensitive Ezra, once again embraced his identity as a Jedi Knight.in embraced his identity as a Jedi Knight. +
Theme
Star Wars +
Title
Kanan Jarrus +
Years
2014-2017 +
Advertisement