"There is no greater satisfaction then that of triumph, forged on the battlefield."
―Kang in LEGO Marvel Super Heroes 2

Nathaniel Richards, a scholar born in the 30th century, becomes fascinated with history and discovers the time travel technology created by Doctor Doom. Richards then travels back in time to ancient Egypt c. 2950 B.C., aboard a Sphinx-shaped timeship, to become the Pharaoh Rama-Tut, with intentions of claiming En Sabah Nur—the mutant destined to become Apocalypse—as his heir. Though briefly blinded in a crash, a radioactive herb restores his sight after frightening the Egyptians by firing his ray-gun. Richards' rule lasts for a time, until his defeat by time-displaced heroes from the 20th century, the Fantastic Four, who had traveled back in time (with some help from a time-traveling Doctor Strange and Khonshu). The Fantastic Four are placed under mind-control by Rama Tut's Ultra-Diode Ray; he makes Invisible Woman his Queen, puts The Thing to work on the ship, plants Mr. Fantastic as a lookout for his armies, and makes Human Torch his court jester. The four of them escape in the Sphinx, while Tut flees back into time, and an explosive device destroys the Sphinx. He eventually returns to rule in ancient Egypt, and encounters the time-traveling West Coast Avengers. He also attempted to recruit Iron Lad (a younger version of himself) to his cause. 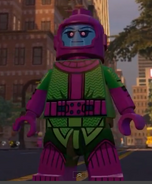