Karai is a Teenage Mutant Ninja Turtles minifigure introduced in 2014. She appeared in the sets 79116 Big Rig Snow Getaway and 79118 Karai's Bike Escape.

Karai is a cunning and strong-willed kunoichi (female ninja). Like many other teenagers Karai is rebellious, anti-authoritarian and driven. She is very loyal to her teacher and adoptive father. The Shredder raised Karai as his own daughter and trained her to become one of the toughest female ninjas in Japan, but Karai has her own ideas about ninjutsu. She shares a special affinity with Leonardo.

Born in 1996 to Hamato Yoshi and Tang Shen, Hamato Miwa and her family once lived in complete harmony in the peacekeeping Hamato Clan until Yoshi's adoptive brother Oroku Saki made an attack on their home in the middle of the night and sought to battle Yoshi to the death. Some flaming candles were struck by Saki's clawed-weapons and caused a fire to break out, killing Tang Shen in the process. Yoshi had thought Miwa had died in the fire as well, but unbeknownst to him, for revenge purposes, Saki had kidnapped her, feeling he should take something from his former friend since he took something from him; the love of Tang Shen. Since then, Saki, renamed "the Shredder" by his birth clan, the Foot, renamed her Karai and raised her as his very own daughter, training her in the ways of ninjutsu and feeding her tons of lies about what happened to Tang Shen.

Presumably, one of these lies was that he and Tang Shen were the ones together and that it was Splinter who caused the immense fire. However, as the love interest of Leonardo, she was shown by the Turtles and her birth father (now a mutant rat outcast called Splinter) her heritage in the Hamatos and got mutated into a serpent while facing Shredder alone. She was found by the Turtles, but captured by Bebop and Rocksteady (two minions of the Shredder). Baxter Stockman was able to cure Karai (with some side effects, so she partly turns into a snake at will), and implanted her a worm, controlling her thoughts, so she forgets, that Splinter is her real father and tries to kill the Turtles and their friends.

Splinter eventually succeeded in freeing Karai from the Shredder's control, and she disappeared. 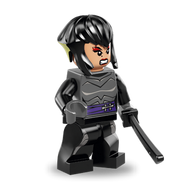 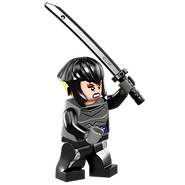 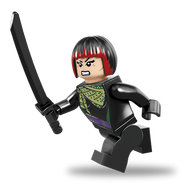 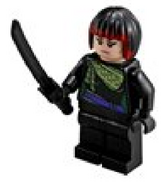