"Whatever it is, I can chop it in half!"
―Karate Master

The Karate Master has black hair. His head has eyes, thick eyebrows, a mouth, and lines at the sides of his mouth. He has a white printed torso and arms as well as yellow hands. He also has white legs His torso markings have the seams of his tunic, a braided rope at the left, and a black belt. His hips piece and legs have black markings that depict the ends of the belt hanging down. The Karate Master has two gold trophies (one of them an extra piece). 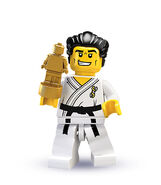 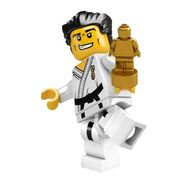 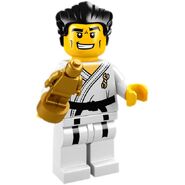 The Karate Master with his trophy

The Weight Lifter and Karate Master fighting over a gift card on LEGO.com.

Deutsch Français
Community content is available under CC-BY-SA unless otherwise noted.
... more about "Karate Master"
RDF feed
Accessories
Gold Trophy +
Appearances
8684 Minifigures Series 2 +
ArticleRating
2 +
Image
KM1.jpg +
InfoboxTemplate
Minifigure +
ShopDescription
“Whatever it is, I can chop it in half! … “Whatever it is, I can chop it in half!”<br />The Karate Master is ready to take on any challenge. His martial arts training is the most important thing to him, and even though he’s already a master, he’s always practicing more to make himself even better.Since he earned his black belt, the Karate Master has devoted his efforts to teaching others to reach their own maximum skill levels – not just at karate, but at everything else that interests them, too. With so many trophies on his shelves, it’s no wonder everyone wants to learn from him!o wonder everyone wants to learn from him! +
Theme
Minifigures
Series 2 +
Title
Karate Master +
Years
2010 +
Advertisement