Brickipedia
Register
Don't have an account?
Sign In
Advertisement
in: Class 4 articles, Articles in need of expansion, Ninjago Minifigures,
and 2 more
English

Karlof is a Ninjago minifigure to be released in 2015. He can turn himself into metal[1], and is the first to be eliminated from the Tournament of Elements, losing to Kai. He appears in the set 70756 Dojo Showdown.

Karlof has an frowning yellow face with black eyebrows, a mustache, and beard. He also has bagged eyes and wears a black samurai helmet. His torso is black, and includes his Metal symbol printed on it in silver, tied to brown ropes. He also has a silver belt. He has light gray hands, plain black legs, and silver shoulder armor.

Karlof was once an engineer who usually created bombers in Metalonia. However, he was soon invited to the Tournament of Elements. On the boat, Karlof tried to steal Skylor's coat, but was confronted by Kai. However, Clouse broke off their fight, which gave both him and Kai a sense of rivalry.

After entering Chen's island, Karlof asked Chen what he will win if he wins the tournament. Chen replied he will win riches beyond his wildest dreams and a lifetime supply of noodles. During the tournament, Karlof ran into the jungle, but was followed by Kai. There they fought for the last Jade Blade. Karlof won and entered Chen's palace with the blade. However, Kai then snuck behind him, unscrewed his metal fist, snatched the Jade Blade, and put it into its shrine, declaring Karlof the loser. He was then thrown down a trap door.

Karlof was then taken to a secret underground ceremony where Chen drained out his metal power. He then took Karlof to his noodle factory.

While the workers of the factory were in line, Cole finds Zane in a cell and talks with him. When Zugu asked what was holding them up, Karlof lied, saying he was tying his shoe. 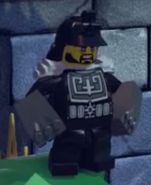