A Kashyyyk Clone Trooper is a Star Wars minifigures that was released in 2014, and again in 2016.

This minifigure is primarily olive green in colour, and wears a phase II clone trooper helmet that features a green visor.

The 41st Ranger Platoon was a clone trooper infantry platoon and strike team in the 41st Elite Corps during the Clone Wars between the Galactic Republic and the Confederacy of Independent Systems. The platoon, which was part of the overall Grand Army of the Republic, consisted of thirty-six troopers divided into four squads.

Members of the 41st Ranger Platoon wore Phase I and later Phase II clone trooper armor and were identified by the forest camouflage and dark green color combinations on their armor. The visors on the helmets of the 41st Ranger Platoon were also green. It was composed of standard clone troopers as well as clone sharpshooters and clone trooper officers. Respectively, the soldiers of the unit were armed with DC-15A blaster carbines, Valken-38xs, DC-17 hand blasters, along with some troopers using DC-15LEs.

The 41st Ranger Platoon was often dispatched to sabotage enemy supply lines and vulnerable installations, allowing them to draw attention away from Republic interests. 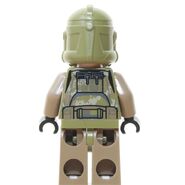 The backprint of the kashyyyk clone trooper. 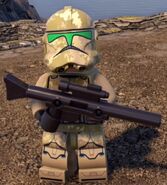