Kate Bishop, the daughter of a wealthy publishing mogul, dedicated her time to local charities, soup kitchens, and women's shelters. After being attacked in Central Park, Kate sought therapy and began training in self-defense, vowing to never again be a victim. She attended the Hawthorne Academy and the Interlochen Arts Camp, where she learned archery (and how to shred the cello).

While attending her older sister's wedding, armed thugs held the guests hostage and demanded that everyone turn over their valuables. A new group of young heroes, called "The Young Avengers", attempted to put a stop to the villainous act, but when things didn't go according to plan, and the situation worsened. A quick thinking Kate provided an opening and rescues the would be heroes, earning her a spot on the team.

Over time, Kate would show that she was more than good in the heat of combat, excelling at feats of self-defense and archery, eventually drawing the attention of the Avengers. Kate was given Hawkeye's original bow and arrows as well as a claim to his code-name. There have been two Hawkeyes ever since. 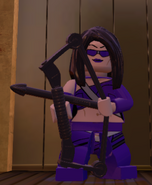 Retrieved from "https://brickipedia.fandom.com/wiki/Kate_Bishop?oldid=1980732"
Community content is available under CC-BY-SA unless otherwise noted.