Ki-Adi-Mundi is a Star Wars minifigure based on the character of the same name from the Star Wars Movies. He was a member of an intelligent race of beings and a respected member of the Jedi Council and led Clone Troopers as a General in the Clone Wars. He was stationed on Mygeeto when Order 66 was issued, and was fired upon by Commander Bacara and Galactic Marines after receiving Palpatine's orders to kill the Jedi. He tried to defend himself, but fell to blaster fire. He appeared in a physical form for the first time in 7959 Geonosian Starfighter.

In 7959 Geonosian Starfighter, he has an exclusive hairpiece which gives his head a larger appearance. It has the mould of hair at the back. He has a printed face which depicts a small beard, an old looking face, and green eyes. He wears a tan shirt, brown trousers and waistcoat, and a blue bladed lightsaber. There is also printing of wrinkles on the back of his head which continues onto his headpiece. 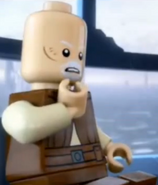 Mundi from the side. 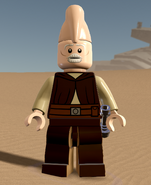