"Waylon Jones, AKA Killer Croc, was born with a terrible medical condition that has warped his body into reptilian form. Having turned against humanity, he possesses extraordinary strength and is immune to toxins."
―Character introduction in LEGO Batman: The Videogame

Killer Croc (real name Waylon Jones) is an enemy of Batman from the DC Universe.

Killer Croc has an exclusive Green head, which shows scaly green skin, red eyes, and sharp teeth. His torso is also exclusive, it is a shirtless male torso with scales and green skin. His arms are also green, but his hands are Black, most likely because they would be too expensive to produce in green at the time. Croc's legs are Dark Blue to represent the blue jeans he often wears.

Killer Croc is now represented by a big figure to make him larger. He is mostly olive green with scale-like bumps covering his back. Some basic detailing is printed on his chest and forehead, and he has an evil grin. He is also wearing blue torn pants, but in a lighter shade of blue.

Killer Croc, still a big-fig, has a more monstrous appearance featuring a hunchback portrayal. His scale-like bumps now extend to where his head would be and he even features a tail the head of a classic LEGO crocodile. A four pack is molded onto his stomach and he has green scales printed on his shoulders. He reintroduces arms, hands and fingers used by the Rancor from Star Wars, but in olive green with scales printed on. His shackles are portrayed as silver, metal armbands with chains attached to them. He has blue pants with a brown rope used as a belt. His pants are torn at the bottom and he has three-toed dinosaur-like feet. His fingernails and toenails are tan.

In LEGO Batman: The Videogame, Killer Croc was identical to his appearance in 7780 The Batboat: Hunt for Killer Croc.

In preliminarily screenshots of LEGO Batman: The Videogame, Killer Croc wears lighter blue pants and has no gloves on, though this was changed in the final cut, although in the Attract Video he appears like in the early photos.

Killer Croc is one of the few Batman characters who has not been rereleased in the Super Heroes line (at the time of the game's release) whose video game design has changed for LEGO Batman 2: DC Super Heroes. Croc's head and torso are the same, but he now has a belt on his hips and his pants are ripped, leaving much of his legs exposed. And his hands are green, rather than black.

In LEGO Batman: The Videogame, Killer Croc was a boss in the level Under the City. He was also a playable character in A Daring Rescue.

Croc can dive, is immune to toxic waste, and he has super strength.

Killer Croc was an important part of The Penguin's team, which also consisted of Bane, Catwoman, and Man-Bat. The team planned to unleash an army of Penguin Minions on Gotham City. After Catwoman successfully stole the Gotham Diamond, she refused to hand it over to Penguin. When the police showed up Penguin and Catwoman both escaped, but they were separated. While searching for Catwoman, Penguin was spotted by a Police Boat, he summoned Killer Croc to help escape the police. After doing so, they were pursued by Batman and Robin, which resulted in the destruction of Penguin's Submarine.

Croc was defeated and sent back to Arkham Asylum.

Killer Croc appears in Arkham Asylum's underground prison after the failed breakout, which he was not a part of. He blocks Robin's way when he is in the tank, and the player has to give him food in order to distract him and let Robin continue his way.

In the console version, he is found under Gotham waterworks and is available to buy for 125,000 studs when subdued, but in the portable version he is only unlocked for purchase when the first minikit of Gotham Metro is found.

In the portable version, his minikit is found in the level Arkham Asylum. He costs 100,000 studs like most of the Batman villains.

Killer Croc reappears in LEGO Batman 3: Beyond Gotham as a playable character. Unlike his previous appearances, Killer Croc is redesigned as a bigfig. He is most likely based off of his appearance in the Batman: Arkham series of video games. In this game Killer Croc is responsible for getting the sewer maps to help Joker, Cheetah, Firefly, and Grundy to get into the Justice Hall to get access to a portal to the Watch Tower. Once the villains are in the Watch Tower Lex Luthor was going to hack the mainframe to use the binary canon to hold the world ransom to make him president.

Waylon Jones was born with a disfiguring genetic skin disorder which gave him scales. Due to this mutation, Waylon was abandoned by his parents as a child and constantly bullied until one day he broke and attacked the bully before running away to the carnival. Having gotten a job as an alligator wrestler in a side-show, Waylon was given the stage-name of Killer Croc but the amount of mockery and shunning he got on a regular basis took a toll on Croc's sanity and made him turn to crime. As a criminal, Croc sharpened his teeth to points and used his immense size and strength to gain an advantage in the criminal underworld. Though he has average intelligence, Croc has super strength, accelerated healing, is a strong swimmer, hardened skin, and powerful jaws thanks to his reptilian genetics. 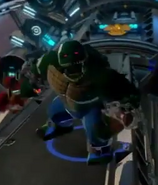 Killer Croc as a Big Fig in LEGO Batman 3 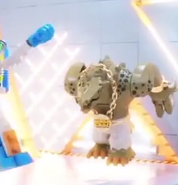