"Drury Walker took on the persona of Killer Moth to fight the Dark Knight, and developed Batman-like equipment to assist in his criminal activities. His Flight Suit enables him to glide silently over the streets of Gotham."
―Character introduction in LEGO Batman: The Videogame

Killer Moth in his physical form is very similar to his previous appearances in the video games. The biggest difference is in his moth helmet and red eyes instead of white, which is more detailed and contoured, and the translucent neon orange head underneath (sometimes replaced with a double-sided head with printed goggles). He uses the Fairy's wings in orange. His torso is purple and shows his star-like moth symbol and some muscle detailing, as well as a yellow belt. His legs are orange with green stripes, and his hands are also orange.

Drury Walker was a common criminal who out of a desire to seek attention and notoriety as a criminal, was inspired by Batman to become the Dark Knight of villains. Escaping from his cell, he donned a moth-motif and would rescue and assist criminals as an enforcer, for a fee. Walker created a fortune as Killer Moth and donned another secret identity, the rich Cameron van Cleer, who would appear innocent when Walker/Killer Moth were arrested.

With the Van Cleer fortune, Walker started equipping himself with devices of his own design made to mirror those of Batman. This included a cocoon-gun, a Moth-mobile, a moth-cave underneath of his mansion, mechanical moth-wings, and a moth-plane. After multiple defeats and blotched plans however, Killer Moth came to develop a reputation in the criminal-underworld as being a laughable joke-villain.

Killer Moth was also a large part of Barbara Gordon's transformation into Batgirl. When Moth planned on kidnapping Bruce Wayne at a costume party, Barbara (in a homemade, "female-Batman" suit) thwarted him.

In LEGO Batman: The Videogame's story, Killer Moth was a part of The Joker's group, which also consisted of Mad Hatter, Scarecrow, and Harley Quinn. Killer Moth asstisted The Joker in reaching the Gotham City Cathedral and freeing Harley Quinn from Commissioner Gordon and the Police Officers once Harley Quinn was freed, Commissioner Gordon contacted Batman and informed him of the attack. Killer Moth was attracted to the floodlight on the Batwing which Batman arrived in. Batman and Robin gave chase to Killer Moth, and eventually they cornered and defeated him, sending him back to Arkham Asylum.

In the DS version of LEGO Batman: The Videogame, Moth can be found in level one of the villain hunt mode.

Killer Moth reappears in LEGO Batman 2: DC Super Heroes. He is one of the Asylum Escapees and proceeds to attack the Gotham Power Plant. He is a minor villain, and a police officer stated jokingly that he is "no joke".

He can be found on the top of the Power Station, and can be bought for 100,000 studs after he is defeated.

In the portable version, he costs 50,000 studs and plays no role in the story.

Batman has trained to be the very best at everything, including racing. Killer Moth trains a lot too, and even makes his own moth-gadgets so he can be a cool bad-guy version of Batman. For some reason, though, he just can’t get any respect. When the Mighty Micros Batcopter goes up against Killer Moth’s bug-faced Moth-Mobile, Gotham City will finally find out who the real ultimate racer is: the Dark Knight or the Multicolored Moth!

No one ever took small-time crook Drury Walker seriously, so he decided to recreate himself as the ultimate Super-Villain version of Batman™ – an evil moth to counter a heroic bat. Despite his many crime-committing gadgets, including gliding wings and a web-firing cocoon gun, Killer Moth’s terrible fashion sense and his many defeats mean that nobody takes him seriously now, either! 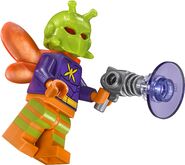 Français
Community content is available under CC-BY-SA unless otherwise noted.
... more about "Killer Moth"
RDF feed
Accessories
Gun, Helmet, Wings +
Appearances
LEGO Batman: The Videogame
LEGO Batman 2: DC Super Heroes
LEGO Batman 3: Beyond Gotham
76054 Batman: Scarecrow Harvest Of Fear +
ArticleRating
2 +
Image
'"`UNIQ--tabber-00000004-QINU`"' +
Img1
Killer Moth.png +  and 576px-Killer_Moth.jpg +
Img2
76069 Killer Moth.jpeg +  and AlternateMoth.png +
Img3
Killer Moth TLBM.jpeg +  and ZZZZKiller Moth.PNG +
Img4
Mothyofdeath.png +
InfoboxTemplate
Minifigure +
ShopDescription
Killer Moth is actually Drury Walker, a sm … Killer Moth is actually Drury Walker, a small-time crook whom no one ever took seriously until he decided to pattern himself after Batman, but as a super villain instead of a hero. Despite his many gadgets (including gliding wings and a web-firing cocoon gun), his unfortunate fashion choices and his knack for being easily defeated has made him a laughingstock in Gotham’s criminal community.Agility: 5<br/>Fighting: 5<br/>Strength: 6<br/>Intelligence: 5<br/>Speed: 5