Killow is a Big Figure character from the Ninjago series and the First General of the Sons of Garmadon.

In the Tales from the Monastery of Spinjitzu short "Weekend Drill", Killow is among the inmates seen incarcerated at Kryptarium Prison. In "Questing for Quests", he is among the former villains mentioned by the Ninja, with the Ninja noting that he is still in prison. They later approach him after responding to a call from Kryptarium, only to find him engaged in painting and posing no apparent threat. 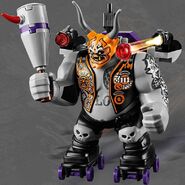