Kimi Raikkonen is a Minifigure based off the real racer and was released in 2007 in the set 8144 Ferrari 248 F1 Team. Then in 2009 he was included in the set 8168 Ferrari Victory along with Felipe Massa.

Räikkönen was born in Espoo. He had a long line of success in karting from the age of ten. His first race outside Finland was in Monaco when he was 15 years old. During the race, the steering wheel broke, but he continued, informing his mechanic by frantically waving the steering wheel in the air on the home straight. Räikkönen's next Monaco race was also memorable; he was thrown on the wrong side of the safety fence in a first lap collision but continued driving until running out of road. Undeterred, he lifted his kart back onto the track and continued to race. His mechanic thought Räikkönen had retired, but he eventually caught up with the other competitors and finished third. In 1998 he was 1st in the Nordic Championship at Varna in Norway. In 1999, Räikkönen placed second in the European Formula Super A championship for the Dutch PDB Racing Team – run by 1980 world champion Peter de Bruijn – utilising a Gillard chassis. He also competed in the Formula Ford Euro Cup. By the age of twenty, he had won the British Formula Renault winter series of 1999, winning the first four races of the year. In 2000, he won seven out of ten events in the Formula Renault UK Championship. Combined, over these two series of Formula Renault, he won 13 out of 23 events – a 56% win rate. 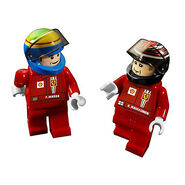