King George's Soldier is a Pirates of the Caribbean minifigure that was released in 2011 within one set, 4193 The London Escape.

He was the guard who payed off Jack Sparrow's driver to deliver Jack and Gibbs to the British Royal Navy. He took great pleasure in watching Sparrow get bashed in the head by a large stick and then be dragged away. He was present in King George's palace when Jack made his escape, jumping onto a dinner table, knocking out many marines and swinging onto a balcony from a chandelier. The soldier later chased Sparrow threw London on horseback, shooting at him with a Flintlock pistol. Jack lit some coal on fire from the coal carriage he had hijacked, and used it to slow down the British as he jumped off of the cart. The British continued to follow the empty carriage, save for this one soldier, who attempted to execute Jack with a rifle, calling him a filthy pirate. However, a mysterious figure hanging in a doorway nearby shot the guard dead. The figure turned out to be Jack's father, Edward Teague. 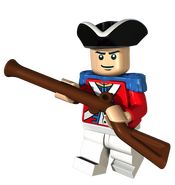 CGI
Add a photo to this gallery

Retrieved from "https://brickipedia.fandom.com/wiki/King_George%27s_Soldier?oldid=1894090"
Community content is available under CC-BY-SA unless otherwise noted.