This article is about Royal Knights minifigure. For other uses, see King.

King Richard also appears as a racer in the video game LEGO Racers, appearing in the second and fifth circuits. There, he was simply called Royal King.

King Richard has red moustache and bushy red sideburns and he also wears his crown. He wears red shirt with four red and white squares and white sleeves. He was also spotted wearing a cape with lion symbol.

The caped version of King Richard 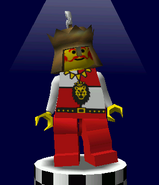 Castle pages from the 1996 large UK catalog, where he is referred to as "King Richard the Lion Heart"