"King Tut™ was a simple Egyptologist until an accident left him convinced that he was the genuine ruler of ancient Egypt. His pyramid-themed riddles and robberies have confounded Gotham City’s police on many occasions, but Batman’s superb knowledge of history and archaeology have helped the Dark Knight foil the phoney pharaoh’s schemes every time!" —LEGO.com

King Tut is a DC Comics minifigure who appears in The LEGO Batman Movie.

William Omaha McElroy was a professor of Egyptology at Yale University in Gotham City who was struck on the head by a rock during a student riot. This head injury lead to William becoming amnesiac and deluded into believing himself a reincarnation of King Tut.

Acting as King Tut, he is a supervillain whose gang and crimes are themed around Ancient Egypt. He believed that Gotham City was in actuality Thebes and that Batman and Robin were rebels trying to keep him from his throne. King Tut referred to his basic minions are called Tutlings, used Ancient execution and torture devices, and laced his speech with history lessons. At one point after having captured Batman he forced him to become his enslaved personal dancer.

If hit on the head again, King Tut's mind regresses back to William McElroy's mind.

In the comics, King Tut was reimagined as Victor Goodman (a play on Tut's actor Victor Buono whose last name translates to, "good man") a criminal egyptologist. Whenever Tut commits crimes he always leaves behind Egypt-themed riddles which lead to him being despised by the Riddler who despised having his modus operandi stolen. This resulted in Riddler and Batman teaming up to take down King Tut. 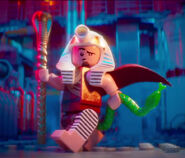