The Kingpin is a New York City crime lord who faces local heroes, such as Spider-Man and Daredevil, and occasionally Punisher.

About to fire from his cane gun 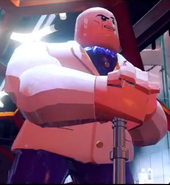 Add a photo to this gallery
Retrieved from "https://brickipedia.fandom.com/wiki/Kingpin?oldid=1936516"
Community content is available under CC-BY-SA unless otherwise noted.