Kirby O'Neil was a scientist living in Manhattan with his daughter April. He was abducted by the Kraang during a plot to capture April, but the Turtles freed him. Afterwards, he became paranoid that the Kraang would seize him or his daughter again, so he rarely left his apartment. However, the Turtles needed him to help keep track of radar dishes that they were using to find a Kraang scout ship, so April told him she needed him to do it for her school science project and that they were tracking pigeons. Standing on the roof of his apartment, Kirby remained unaware of the Kraang threat until the ship passed right over them. During an attempt to defeat the Kraang, the Turtles accidentally knocked some mutagen canisters out of the ship. One of them hit Kirby, shattering and spilling the ooze all over him. He stumbled and fell off the roof, startling a large group of bats that were sleeping on his balcony. The mutagen combined the bats' DNA with Kirby's, causing him to mutate into the Kirby Bat. Kirby was mostly unharmed, but his mind was affected drastically, making him behave more like a bat than a human. Soon The Turtles found a way to cure him. 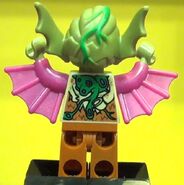