Kjeld Playwell is a character from the movie The Adventures of Clutch Powers. He is the fictional head of the LEGO Organization.

Kjeld Playwell is the head of the LEGO Organization, and is Clutch Powers and his team's boss. He is portrayed as serious and always on task, aiming for his employees to be the best when it comes to the welfare of others.

After returning from a mine and handing Kjeld a crystal of which he found in a mine, Kjeld assigns Clutch his new team, which consists of: Peg Mooring, Brick Masterson, and Bernie Von Beam. He then briefs him on his next mission, which will bring him to Planet X4 to find out what happened to the Space police Prison after receiving a distress signal.

Kjeld's torso depicts him wearing a black suit with a red tie, with an I.D. hanging out. He has black legs and arms, and yellow hands. His yellow face depicts a man with a gray beard and moustaches.

Kjeld Playwell is voiced by Paul Michael Glaser. He has been acting since the 1960's and is also a Director. He is perhaps best known for his role as Detective David Starsky on the 1970s television series Starsky and Hutch. 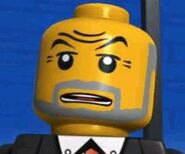 Close up
Add a photo to this gallery
Retrieved from "https://brickipedia.fandom.com/wiki/Kjeld_Playwell?oldid=1920929"
Community content is available under CC-BY-SA unless otherwise noted.