Koleniko is a minifigure who was the primary navigator aboard the Flying Dutchman ship along with Greenbeard in Pirates of the Carribean. Koleniko played Liar's Dice with Clanker and Maccus. He later returned to his human form when Davy Jones was killed and Will Turner took over. He is one of the sailors who kept order aboard the Flying Dutchman with Jimmy Legs and Maccus during the battle of the Maelstrom. On isla Cruces he battles Jack, who hits him with an oar. He is seen with Maccus in both films quite often. He has barnacles on him alike many others of the crew, but is covered with Pufferfish spines, distinquishing him from the others. 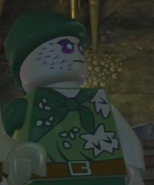 The side of Koleniko's face, showing the spines of a pufferfish.

Koleniko (center) rising out of the water with Hadras (far left) and Crash (far right).

Retrieved from "https://brickipedia.fandom.com/wiki/Koleniko?oldid=1662047"
Community content is available under CC-BY-SA unless otherwise noted.