Brickipedia
Register
Don't have an account?
Sign In
Advertisement
in: Class 4 articles, Minifigures introduced in 2009, LEGO Battles minifigures,
and 3 more

Kranxx is an orange Alien criminal from the Space Police III theme.

Kranxx is an alien criminal from the Space Police III line, and is the leader of the criminal biker group, the Black Hole Gang. He has a skull belt buckle and a skull on his vest, which is the symbol of the Black Hole Gang. Kranxx is usually found breaking speed limits or blowing up diners. Another alien criminal, Rench, looks very similar to him, but his skin is a lime-green colour. Rench is apparently Kranxx's third cousin, which explains the similarities. They are also probably the same alien species as well, with colour variations.

Kranxx is a pilot with a will for speed. In the sets in which he appears, he pilots smaller craft with large thrusters. 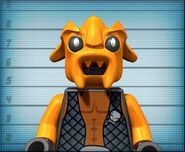 After a win in LEGO Battles.

After a loss in LEGO Battles.

Kranxx is apprehended by the Space Police in LEGO Battles.