Krypto the Superdog is a supporting character in LEGO Batman 3: Beyond Gotham, he is Superman's sidekick canine.

Krypto was a white dog that was sent to Earth with Kal-El by Jor-El. When landing on Earth, Krypto has similar powers to the Man of Steel himself. A human kid named Kevin Whitney adopted him because Kal, now Clark Kent as Superman, was too busy saving the world. Krypto poses an ordinary dog near Kevin and his parents, but dubbed "Superdog" as his secret identity for his superheroic deeds, the same way Clark Kent dubbed "Superman".

As one of the last survivors of the planet Krypton, Krypto™ the Super-Dog was sent to Earth to be the companion and protector of Superman™ when he was a baby. The Earth’s yellow sun grants Krypto the same powers as Superman, including flight, heat vision and super-strength, which the canine uses to aid the Man of Steel™ on their many adventures. Although he’s a loyal pet, he lacks the ability to control and understand his powers, which often gets him into trouble.

Krypto's character token can be unlocked by beating him in a race on Zamaron. 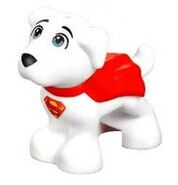