Kyle Rayner is a DC Comics Minifigure who appears in LEGO Batman 3: Beyond Gotham.

Kyle Rayner was given a Green Lantern power ring by Ganthet, the last of the Guardians of the Universe. Somewhat irresponsible at first, Kyle grew into his role as a hero due to the responsibility given by his newfound power, and eventually became a member of the Justice League alongside Aquaman, Batman, Martian Manhunter, Superman, Wally West and Wonder Woman. He developed a rivalry that turned into friendship with Wally, the closer to his age among his teammates.

When the threat of the Black Hand became apparent during the "The New 52" (a reboot of the DC Comics universe), it was Kyle who led the counterattack by doing the impossible-- uniting all seven of the Lantern Corps together--which turned him into a brand-new and most powerful Lantern of all: the White Lantern.

As the White Lantern, Kyle Rayner is able to control all of the powers and emotions of the Lantern Corps. With his white ring fueled with the power of life, some of his comrades have said he became something of a demigod. 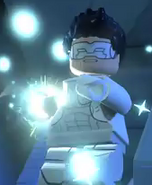 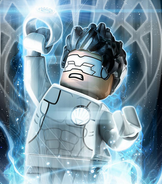